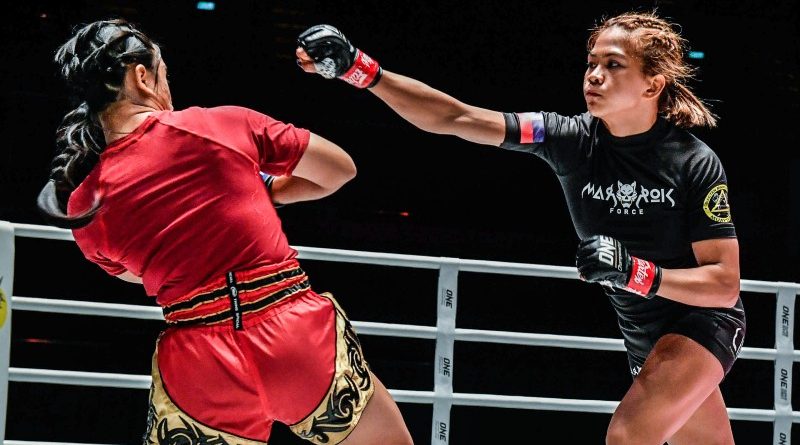 “I was actually expecting her to finish her unranked opponent, but it didn’t happen. I enjoyed watching it,” said the 24-year-old rising star, currently based out of Thailand, in response to Meng’s call out.

“Of course, I’m always open to facing anyone they put me in the Circle with. Meng Bo is the #2-ranked atomweight, so we will meet sooner or later. I know at some point, whether it’s in the tournament, or outside of it, we will fight.”

The Chinese fighter, fresh from an impressive unanimous decision win against former ONE World Title challenger Samara Santos at ONE: UNBREAKABLE last January 22, took a dig at the Filipina fighter’s skills following the contest.

She promised to knock the #1-ranked atomweight out should they meet in the ONE Circle.

Zamboanga maintains that she is in constant training at their new gym in Bangkok, Marrok Force, where she continues to hone her skills alongside older brother Drex “T-Rex” Zamboanga and teammate Fritz Biagtan.

The top-billed Filipina mixed martial arts star is preparing herself for a possible entry into the much-talked about ONE Atomweight World Grand Prix.

Zamboanga says her training is coming along just fine and that her goal remains to bring the ONE World Title home to the Philippines before the year ends.

“Right now I’m just enjoying my time here training with my new team here at Marrok Force. It’s good to have this solid support system by me all the time. We help each other get better and improve, and we’re always in shape because that fight offer could come at any time,” Zamboanga said.

“I’m excited this year because there are a lot of possibilities. I’m really motivated to take my career to the next level. To all my fans in the Philippines, thank you for the love and support. I appreciate it and I promise I will do my best in every fight. Let’s get that world title this year!”

This post has already been read 2338 times!The city identified some twelve priority investment areas that are expected to contribute in efforts