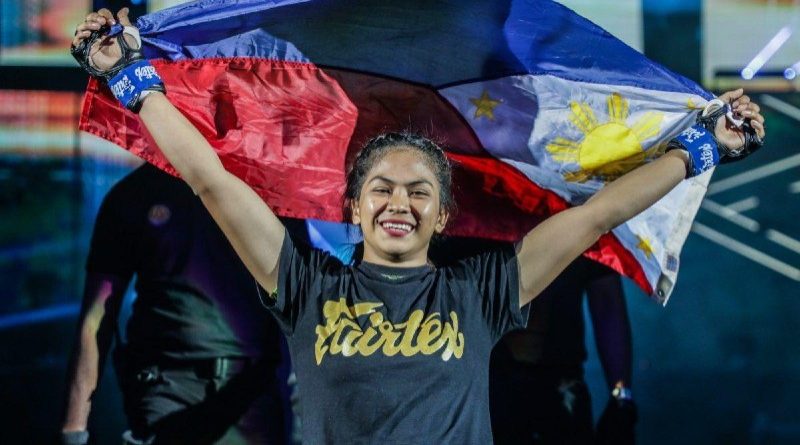 Rising ONE Championship star Denice “The Menace Fairtex” Zamboanga took a well-calculated risk of sacrifices and the payoff she got was more than she bargained for.

It was just last February that she planned to call out long-tine ONE Women’s Atomweight ruler Angela “Unstoppable” Lee for a shot at the title if she won her match against veteran and perennial title contender Mei Yamaguchi at ONE: King of the Jungle in Singapore.

She didn’t have to. ONE Chairman and CEO Chatri Sityodtong instead offered the ONE Women’s Atomweight title shot before she could utter a word of challenge.

“I was really happy it didn’t come from me. It makes it even more special than calling out the champ because I felt like I really earned it.” she said of this moment that came just two bouts in the promotion.

This, however, came about at the expense of extreme sacrifices on Zamboanga’s end, giving up a job with the Philippine government and be away from her family.

Zamboanga has never been one who shy away from taking a risk or two in life. In fact, well-calculated risks have helped her discover who she is today, not only as an athlete, but as a human being.

She took on a role in information technology after completing her studies at the Polytechnic University of The Philippines. She then moved into a post at a government office shortly thereafter.

But deep down, her heart wasn’t completely in this 9:00 – 5:00 routine. Zamboanga knew she was cut from a different cloth and the regular man’s job wasn’t for her.

She believed she was destined for other things.

In fact, she dreamed becoming a police officer as an ambitious youngster because she could put her passion for the physical and mental sides of life to good use.

These inclinations would eventually find their perfect home when she decided to tag along with her brother, former karate world champion Drex Zamboanga, to training one day.

She got immediately hooked on mixed martial arts as its added diversity bonded well with her being well-versed in karate.

“I do like the idea of being a strong woman,” said Zamboanga.

“I feel like I’m physically and mentally strong. It’s challenging. You have to be disciplined, and you will learn a lot in this sport. It’s helped me to be disciplined and patient. You cannot just be a good fighter without experiencing hardship, it is also like that in life. Before you succeed, you have to do your part.”

Armed with those lessons and brimming with ambition, Zamboanga knew she had to give herself the best chance possible to succeed in her newfound passion, even if it meant abandoning the career path she’d studied so hard for.

“It was a very hard time for me, that moment I had to decide between mixed martial arts and my ‘work’ work,” she recalled. “It was really tough and it was the biggest decision I made in my life.”

Fortunately, friends and family were unanimously positive and encouraged Zamboanga to wholeheartedly follow the same path her brother had chosen and take a chance at exceptional brewing talent and the genuine passion she had for martial arts.

“I had a good job back then, but thank God my parents supported me when I chose martial arts over my work,” says Zamboanga.

“My friends and family are very supportive when it comes to my career. So when they knew that I chose martial arts as my career, they respected my decision and they really supported me.”

Zamboanga proceeded to take another chance and packed her bags to jet off and join her brother at the world-renowned Fairtex Training Camp in Pattaya, Thailand, where she has since evolved into a much more diverse and well-rounded athlete.

Looking back now, they were both risks that were clearly worth taking.

After a short three years and two bouts, “The Menace Fairtex” has established herself as one of the most promising young talents in ONE’s atomweight division.

She made a shock unanimous decision victory over fellow up-and-comer Jihin Radzuan at ONE: Mark of Greatness in Kuala Lumpur during her ONE promotional debut on June 2019.

Zamboanga backed that up with the comprehensive upset win over Yamaguchi.

They were statement performances that sent clear messages to the rest of the division that she’s not simply here to take part, she’s here to take over to which Sityodtong clearly agreed as evidenced by offering the blockbuster bout to a tearful Zamboanga.

It was an emotional moment that justified all of the sacrifices she’d made in her young career to date.

“I’m super grateful and overwhelmed. I can’t express how happy I am,” she said.

“I always trained hard. I went to Thailand to train, far away from my family. After all of the big challenges and hardships, I got the win.”

Zamboanga has made a habit of shocking fans, and she plans to do the same when she eventually gets her chance to take on “Unstoppable”, one of the promotion’s most decorated athletes and somebody she’s always looked to as a source of inspiration.

“This is the biggest challenge I will face and I will train so hard for this. She is one of the people I’ve always watched in MMA, and now I have to compete against her for the world title. It will definitely be a hard one. Everything I will show inside the Circle will be a surprise. I want to surprise everyone on fight night,” Zamboanga said.

While the impact of the coronavirus pandemic on the sporting world will mean that Zamboanga will have to be patient, she knows her time is coming, and she’s determined to be as ready as possible to make both her family and her nation proud when that time comes.

“Beating a star like Angela Lee and winning a world title means so much to me. It’s like a dream come true – a win over my idol and a win for the Philippines,” Zamboanga said.

“I represent my country not just locally but internationally. I’m so proud to be a Filipino. Even if I fight internationally, I can feel the support of the Filipino fans, even through their messages and cheers for me.”

Still just 23 years of age and boasting a clean professional record, Zamboanga has yet to taste defeat, and she’s confident that trend will continue when she gets the chance to share the biggest stage of her fledgling career to date against the ever-dangerous Singaporean.

Armando M. Bolislis with reports from ONE.