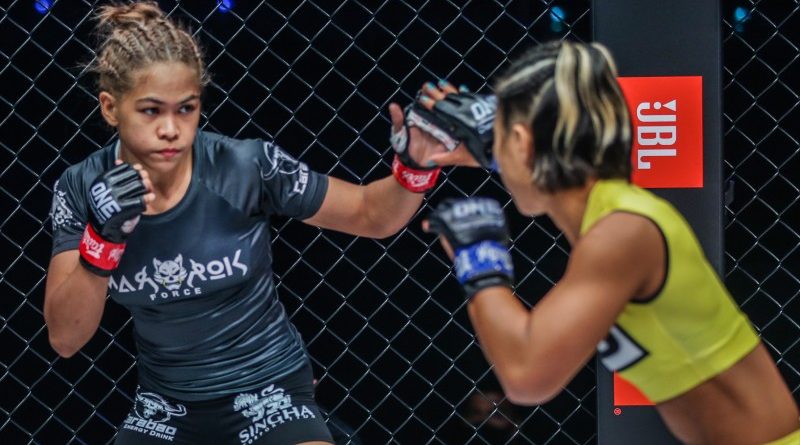 Denice “Lycan Queen” Zamboanga suffered triple black eye during her return to action yesterday, September 3, 2021, as she not only got a bloody cut on her right forehead, she was also dealt a gut-wrenching split decision loss that knocked her out of the ONE Women’s Atomweight World Grand Prix and hand her the first defeat of her career.

Her opponent that night, South Korean “Arale Chan” Seo Hee Ham, completed the semifinal bracket of the Grand Prix with an efficient performance against the top-ranked contender in the co-main event of the historic All-female ONE: EMPOWER.

Even before the fight, Ham had been tagged as no easy opponent for Zamboanga as she was also a ranked contender, occupying the fifth spot. Even a number of analysts saw her a potential winner of the tournament.

Ham certainly put herself off to a flying start  with efficiency and effective striking against the barreling Zamboanga, particularly her left hand which consistently found it target all night long.

The Filipina, however, came in with brimming confidence, displayed aggressive stance and looked to dictate the pace of the bout. Her over aggressiveness, though, had her paying the price as Ham connected everytime she overcommitted.

Zambonga got a taste of Ham’s reputation as a deadly striker when she absorbed a straight left as soon as the fight got underway.

A brief feeling-out process ensued before Zamboanga finally made her move and pushed Ham to the Circle Wall. The action remained within the clinch until the final seconds when the “Lycan Queen” scored a takedown.

Ham made the adjustment and started the second with a combination highlighted by another left straight then pushed the throttle as Zamboanga struggled to find her range to counter.

Realizing she is losing the striking battle, Zamboanga went grappling and scored a takedown.

Ham’s fight experience and IQ was in full display as she mange to bring the action back to a clinch using the fence which forced the referee to break it up due to lack of action.

Zamboanga connected a solid overhand right as the striking action resumed but continued to be at the receiving end of Ham’s left straight up to the end of the round.

Zamboanga rose up for the third round just to be stalked once more by her rival who continues to have great success with her left hand.

The Filipina tried to push her attacks a notch up by firing some head kicks but realized taking down Ham was the only way she could neutralize her footwork, reach, and speed.

In doing so, an unfortunate turn of events did her damage as the fighters inadvertently clashed heads when she lunged forward for a takedown, opening a gash in her forehead that spilled blood profusely.

Following lull in the action where ONE medical staff worked on the cut, Zamboanga made a last ditch effort to sway the judges minds by rushing in and slammed Ham to the ground.

She retained control while dishing occasional ground and pound until the bell sounded.

Zamboanga’s record dipped to 8-1 after the loss. She is now 3-1 under the ONE Championship banner.

Ham raised her already impressive record to 24-8. She extended her winning streak to seven with the ONE debut win.

She lived to her reputation of being a tough out and taking opponents to the limits enroute to impressing judges to award her the victories.  17 of her 24 wins came by decisions and lost 5 of 8 defeats by the same kind.

66       66SharesThis post has already been read 16494 times!Firstly, great emphasis is given that the contents of this series are intended