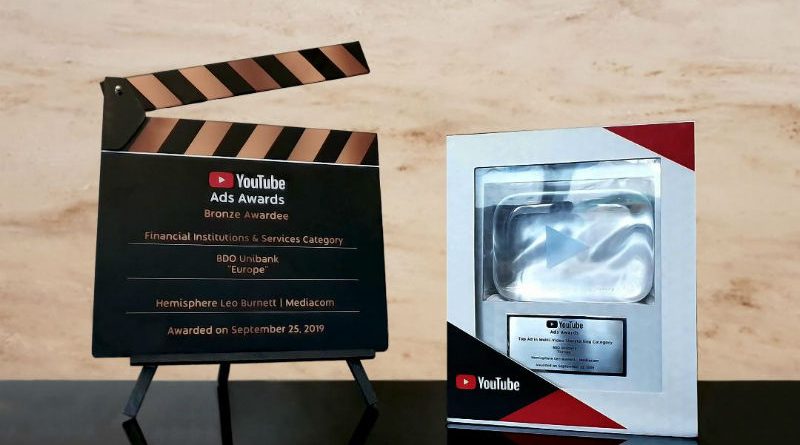 BDO Unibank, Inc. became the only bank to be recognized for its creative excellence during the 2019 YouTube Ads Awards.

The bank was conferred with a coveted Crystal Award in the Multi-video Storytelling category for its Kwentong Kabayan video series and a Bronze Award in the Financial Institutions and Services category for “Europe,” one of three videos in the winning series.

Launched in 2018, the Kwentong Kabayan series was produced by BDO together with creative agency Hemisphere-Leo Burnett and production house Film Pabrika.

It depicts the real life experiences of overseas Filipinos who take on unique jobs to provide for their families. “Middle East” documents a father’s journey as he traverses dangerous zones to deliver water from one location to another; “Japan” shows how a young Filipina takes on the role of a tokushu seiso, a person hired to clean-up the belongings of someone who dies alone; while “Europe” tells the story of a father who performs in a nightclub as a celebrated drag queen.

The YouTube Ads Awards recognizes “outstanding campaigns that demonstrate the power of innovative and creative story telling” on the video-sharing website.

“The Kwentong Kabayan series is our way of paying tribute to overseas Filipinos and their hard work, self-sacrifice, and incredible love for family. As their bank partner, we know first-hand that there is nothing they wouldn’t do just to care for their loved ones back at home,” said Geneva Gloria, senior vice president and head of BDO Remit. “Through our remittance services, it is our honor to play a role in their life stories.”

BDO created the BDO Kabayan Savings Accounts to bridge overseas Filipinos and their beneficiaries. Overseas Filipinos can make their remittances in the bank’s full-service branches in Hong Kong and Singapore as well as 20 remittance and representative offices in Asia, Europe, North America, and the Middle East.

Meanwhile, beneficiaries can claim remittances from over 1,100 BDO branches, more than 150 BDO Network Bank branches, and about 100 BDO Remit counters in SM Malls as well as 5,000 plus Cash Agad partner locations nationwide. Cash Agad is a service that allows accountholders in areas where there are limited banks and ATMs to withdraw their cash or remittances conveniently.

Each Kwentong Kabayan video has been well-received online with an outpouring of positive engagement on the BDO Kabayan Facebook page, which has over 360,000 followers consisting mostly of overseas Filipinos and their beneficiaries. On the BDO Unibank YouTube channel, each video has already reached millions of views with “Middle East” getting 7.9 million views to date.

Earlier this year, the Kwentong Kabayan series was recognized with a Gold Award in the 2019 Kidlat Awards as well as a Gold in Best Production Design for the “Japan” video.

The second YouTube Ads Awards received more than 360 entries. Of this number, only 42 videos were selected to win Crystal, Silver, and Bronze Awards across 17 categories by the esteemed judging panel composed of advertising and marketing executives, film and commercial directors, and entertainment personalities.

“We are thankful for this recognition but more so for the value it puts on the stories of our overseas Filipinos, whom we consider as our modern-day unsung heroes,” concluded Gloria.