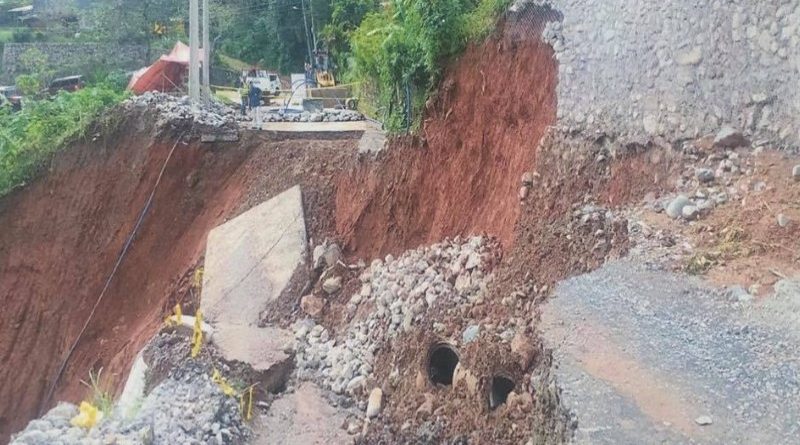 LA TRINIDAD, Benguet – Benguet Caretaker Congressman and Anti-Crime and Terrorism through Community Involvement and Support (ACT-CIS) Party-list Rep. Eric Go Yap assured residents living along the Ambiong-Lubas-Tawang secondary national road and motorists using the said roadline he will make representation with the public works department for the provision of the required funding support to restore the damaged portion of the road that caused its temporary closure to vehicular traffic.

In a video message posted on his Facebook account, Yap, who chairs the powerful House Committee on Appropriations, said funds should be made available the soonest possible time to ensure the immediate opening of the roadline to motorists and residents because it is a major alternate road in going in and out of the capital town.

He pointed out it is also important to ensure all roads leading to the different communities around the country allow people to freely move around for their economic activities that help sustain their families.

Earlier, Engr. Ireneo S. Gallato, District Engineer of the Department of Public Works and Highways–First Benguet Engineering District (DPWH-FBED) reported to Congressman Yap that the repair of damages along the different national roads caused by foregone weather disturbances, such as Typhoon Ompong in 2018, and the perennial habagat, had been delayed mainly because of the wrath of the Coronavirus Disease 2019 (COVID-19) global pandemic.

He disclosed a concrete example is the road cut along the Ambiong-Lubas-Tawang road which occurred during the height of Typhoon Ompong in September 2018.

According to him, the DPWH-FBED immediately prepared the program of work for the restoration of the road cut worth P20 million but the wrath of COVID-19 greatly affected the normal course in the release of calamity funds where the funds for the aforesaid project will be sourced.

Gallato claimed the P16 million allotted by the agency for the restoration project was programmed for later release but the district office still proceeded with the required procurement of the project making use of the initial P4 million made available for the project.

The district engineer revealed the project was awarded to Kalahan General Construction and Supply which was directed to immediately start restoration works.

However, he narrated that the Cordillera experienced heavy rains due to thunderstorms and the rain bands of Typhoon Dindo that further saturated the precarious state of the road cut resulting to a much bigger landslide and caused the total closure of the road section on the night of August 2, 2020.

Congressman Yap even went to the extent of encouraging the contractor of the road cut restoration project to proceed with the ongoing works even while he was working for the release of additional funds for the project in the area. Gallato commended the recent pronouncement of Congressman Yap in the social media that in case he will fail to source out funds from the public works department to complete the project, he will pay the contractor from his personal resources, saying that the lawmaker’s actions and words reflects the type of dedicated public servants who deserve to be in their positions because what matter is the greater interest of the people that they serve.