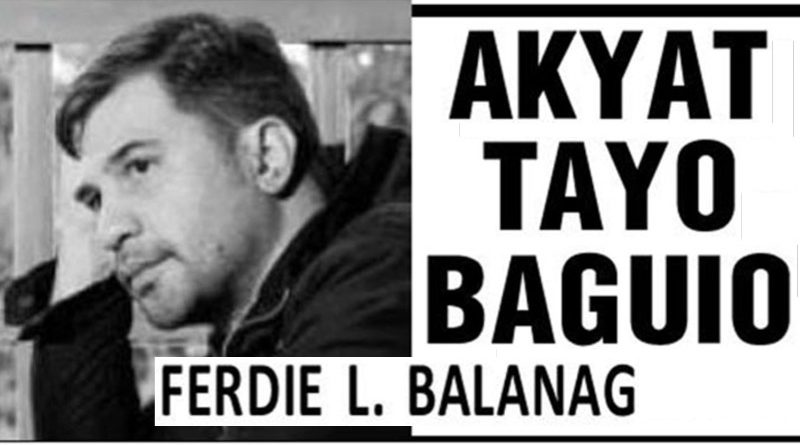 Getting to quarter-back this space — thanks to the paper’s publisher — seemed at first much of a tough job for one who’s best way of expressing my chosen endeavor is through film. Filling up this invaluable space is as much, if not more than, a challenge. Blazing new trails is par for the course, and Noly, if I get into trouble, you’d have to share the burden.

Why Angat Tayo Baguio? To begin with, nothing can more aptly explain a tourism revival campaign than an exhortation that cuts through so many layers of visual and audal rendition. Let us run through briefly what has gone us past these past four months, and counting.

Much of tourism’s positive impact to Baguio’s economy is during the summer months, beginning with the Panagbenga festival all the way through the string of well-designed activities meant to lure the tourist crowds up here. For decades, this has been Baguio’s allure — the festival type of tourism promotion that has served Baguio well in more ways than one.

Thus, year in and year out, Baguio tourism has raked in much of the revenue to pump-up an economy driven by other assets: education, trade and commerce, manufacturing, service industries etc. All throughout, it has been tourism that drew in the wherewithal to keep the local economy going, some kind of a spread-the-sunshine endeavor for everyone to share.

Until the pandemic came this year, and the quarantine restrictions that had to be imposed, if only primarily to keep everyone out of harm’s way. In just a snap, tourism fell, belly-up. In too sudden a way, businesses closed down, jobs dis-materialized, all because travel lockdown made it impossible for travellers to get into the mystic wonderment of a Baguio long held as a primary destination.

These last four months have been a mighty struggle, with tourism businesses at the tailend of economic re-opening. In a way, the pandemic scare made people shy away from being out of homes. Even as they heeded health protocols, opting to obey essential things to do, whether in our out of homes, tourism was still lumbering at the bottom pit of businesses allowed to resume, albeit on strictly managed health and safety practices.

Instead of frittering and cursing opportunites lost, tourism planners used the time to re-think, to re-visit traditional ways, to evaluate their relevance in today’s troubling times, taking into careful consideration the realities staring at them.

First, travel restrictions from point to point, even within domestic borders, will definitely take quite a while before they get to be lifted. Second, even if travelling to and fro gets green-lighted, topmost consideration remains on the health and safety side. How safe is Baguio to go to?

Meantime, the city begun reaping accolades of having the best practices in place — thanks to Mayor Benjie’s solid commitment to put the people’s health needs at the very top of concerns. Each time health protocols get waylaid, adjustments are quickly made, regulations get tightened, spot-checks go through intensified adaptation.

A safe destination, that’s what Baguio has become to be known nationwide.

The last four months have further been a reprieve for Mother Nature to recuperate. Much too much has Baguio’s natural environment been debased from decades of abuse, insensitivity, and neglect. The recent Christmas in Baguio was an experience worth heeding — tourists just ignored simple environmentally caring practices that needed to be re-inculcated, if not drastically required.

Now, a rejuvenating environment that Baguio has acquired simply becomes a telling, alluring come-on for responsible tourism to be encouraged, if only to keep the natural resources to keep on re-growing and re-glowing, as it were.

Angat Tayo Baguio highlights an opportunity to be part of an uplifting experience when in Baguio — being immersed in a memorable visit to a safe, wholesome, recuperative place, where in-person engagement becomes commonplace with Mother Nature’s kinder, charming attributes.

Angat Tayo Baguio underscores a sense of belonging — you and I and the rest of us — to a rare breed of nature lovers who are part of a human community in a homecoming with its ancestral roots — the mountain landscape of rising and descending hills, the valleys cradling settlements at peace, the pine trees getting into a courageous struggle to reach their own skies, the flowering plants erupting into a cavalcade of colors unseen anywhere else adorning zig-zagging roads to nowhere but everywhere.

Angat Tayo Baguio is more than just a tug-of-the-moment catchphrase or a defining thrust for a reawakened consciousness. It is our gentle invitation to an emerging Shangrila uniquely built from the ground from nature’s abundant blessings and peopled by an indomitable race of mountain-raised folks with the most inimitable welcoming gesture anywhere else, their smiling faces punctuated by an impish grin fro ear to ear.

This is Baguio now and hereafter: Angat Na, Tayo na!