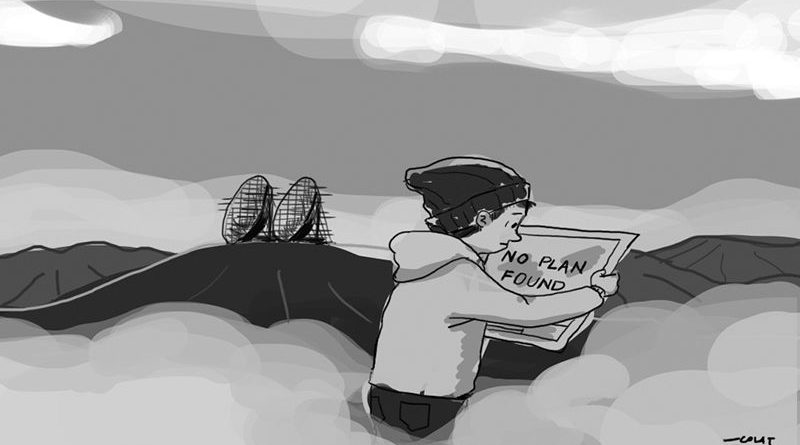 Mount Sto. Tomas, an over-3,000 hectare forest reservation, was placed in the spot light in 2013 after it served as the main shooting site location of one of the famous local television series, Forever More, which attracted the influx of thousands of foreign and domestic visitors. It was supposed to be an added tourism site for visitors to see, considering its location overlooking Baguio City and is practically close to heaven once the clouds kiss the mountain during the afternoons and early evenings. Visitors from the city proper have to wait for several hours just for them to be able to visit the place where the television series is being filmed because of the enormous volume of tourists wanting to see the area, especially during weekends. Because of the influx of people, residents and other enterprising individuals were tempted to put up businesses in the area to earn income for their families. The local government of Tuba tried its best to regulate parking and collect the required environmental fee from the visitors to help sustain the beauty and scenery of the place.

However, the enormous influx of people in the area took a back seat after the discovery of the allegedly cutting of some 700 assorted tree seedlings and saplings in portions of the watershed to pave the way for the excavation of a road . This caused the alleged siltation of the Amliang River and the eventual shutdown of the sources of water of the Baguio Water District (BWD) that supply 30 percent of the water requirements of Baguio residents. The cutting of tree seedlings and saplings and the excavation activity were allegedly done without the required permits from the concerned government agencies and the local government. Worse, the heavy equipment of RUA Construction and Development Corporation, Goldrich Construction and BLC Construction and Aggregates were used in the alleged illegal cutting of trees and excavation activities done in the property of a former Baguio lawmaker.

The alleged willful destruction of the environment became a celebrated environmental case in the city wherein it resulted to the issuance of the Temporary Environment Protection Order (TEPO) that virtually put an end to all economic activities in the place and deprived the residents the chance to earn the needed decent income for their families. From a busy area to a supposed ghost town could be one of the most appropriate descriptions that could be used to describe the current situation in the reservation. Subsequently, the Supreme Court (SC) issued the required Permanent Environment Protection Order (PEPO) for the area that mandated all parties, including the inhabitants, from pursuing large-scale development activities because the area remains to be a forest reservation pursuant to Proclamation No. 581 issued sometime in July 1940. The PEPO mandated the Department of Environment and Natural Resources (DENR), in coordination with the local government and other concerned government agencies, to formulate a comprehensive master development plan for the area so that the needed development works could be done. The latest ruling of the SC upholding the earlier decision of the Ombudsman to file the charges of violation of the Revised Forestry Code of the Philippines against the embattled former lawmaker and his cohorts speaks well that justice should be accorded to those who virtually ravaged the environment for what was described as an eco-park.

We believe it is high time for the DENR to be more aggressive in the formulation of the reservation’s comprehensive master development plan to allow inhabitants of the place to have leeway in improving their residences and their existing sources of livelihood. People living in the place are willing to cooperate with the stringent policies to be implemented by the concerned government agencies, provided that there should already be a basis on how to go about the activities in the place. We deplore the fact that the DENR personnel in charge of monitoring the activities in the reservation are allegedly selective in the strict implementation of the policies that were handed down by the PEPO and other related laws, rules and regulations.

The concerned government agencies and the local government must get their act together by finalizing the desired plan and submit the same to the SC for confirmation, so there will be a guide on how to go about development in Mount Sto. Tomas. Let us not waste the opportunity of the area being developed and regulated as an ecotourism destination featuring agri-tourism farms beneficial to the people living in the place. Let us not deprive the inhabitants a chance to enjoy the benefits of the environment because they will be the stewards of the place and will surely adhere to what has been provided in the pan.