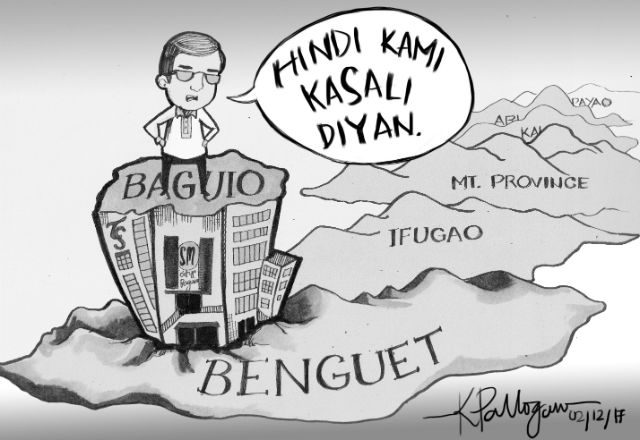 Baguio City, the country’s undisputed Summer Capital, was declared a chartered city on September 1, 1909, by the Philippine Commission during its regular session held in now one of the city’s declared heritage sites. It is within the geographical jurisdiction of Benguet, which was part of the old Mountain Province before it was divided into the present four provinces by virtue of Republic Act (RA) 4695 or the Division Law. When former President Ferdinand Marcos issued Batas Pambansa (BP) No. 1 which created the country’s 13 regions, Baguio, Benguet and Mountain Province were made part of the Ilocos region (Region 1) while Ifugao and Kalinga-Apayao were part of the Cagayan Valley region (Region 2) that resulted in the separation of a supposed one Cordillera that time. During the drafting of the present Constitution, various groups from the Cordillera provinces lobbied for the inclusion of a provision for the establishment of an autonomous Cordillera region. Coming from various political persuasions, the advocates succeeded in making sure that the new Constitution provided for the establishment of autonomous regions in Muslim Mindanao and the Cordillera.

Subsequently, then President Corazon Aquino issued Executive Order (EO) No. 220 that established the Cordillera Administrative Region (CAR) on July 15, 1987. The CAR, which was composed of Baguio, Benguet, Abra and Mountain Province from Region I and Ifugao and Kalinga-Apayao from Region II, was aimed at administering the affairs of the region, enhancing socio-economic activities in the region and preparing the region for autonomy. With the establishment of CAR, national government line agencies put up their regional offices in Baguio City and in the nearby town of La Trinidad. This created more than 4,000 jobs not only for Igorots and other Cordillerans but also for qualified applicants from the lowlands. From the very start, Baguio had been a multi-cultural community with everyone given an equal opportunity for employment in the agencies.

The subdivision of the old Mountain Province into four independent provinces allowed the local governments to have their own internal revenue allotments from the national government and separate allocations for their programmed priority projects. Aside from generating employment for the people, the establishment of the regional line agencies also allowed the region to have an equitable share of the government’s resources and projects. It should be noted that the CAR gets the lowest allocations from line agencies among the country’s 18 regions. Among the primary reasons for the region getting a meager share from the resources of government include its limited land area and population when the criteria in the distribution of the resources are land area and population; the implementation of national standards which are purely to the advantage of the lowlands when in fact, such standards are not applicable in the peculiar terrain of the region and the bias for areas with bigger population.

We have to admit that Baguio’s current state of development would not have been realized without the various regional line agencies that have contributed to the robust growth of the city over the past three decades. When the city was still part of Region I, it never enjoyed the kind of development that it is currently experiencing considering that it is the center of trade and commerce not only in the Cordillera but also in northern Luzon. People who experienced the difficulties of transacting business when the regional line agencies were in Region I do not want their children and their children’s children to suffer what they have experienced. This is one of the reasons they are clamoring for the establishment of an autonomous region for us to be able to govern ourselves apart from the preservation and protection of the rich culture of the Cordillerans, including those who chose to live with us.

We are now deeply saddened by the positon of the city’s representative to Congress, neophyte lawmaker Representative Mark Go. Although he claims to be a leader of the Cordillera, he seems not to act like one with his claim that Baguio should be excluded from an autonomous region because it is better for the city to be part of Region I. We believe we do not need this type of leader who does not support a better arrangement for the CAR. Part of his campaign slogan was to use the word Igorotak and it is a shame for him to want to make services less accessible to Igorots. Now, his true elitist brand of leadership is becoming evident. It is time for Cordillerans to wake up to the truth that we deserve a better leader than him.

We must rally behind what we think is proper for our region: to achieve autonomy while joining the federalism bandwagon by working out the recognition of the Cordillera as an independent federal state or to be an autonomous region in a federal state. We do not need to go back to Region I and again be treated as second-class citizens. Go can go to Region I.