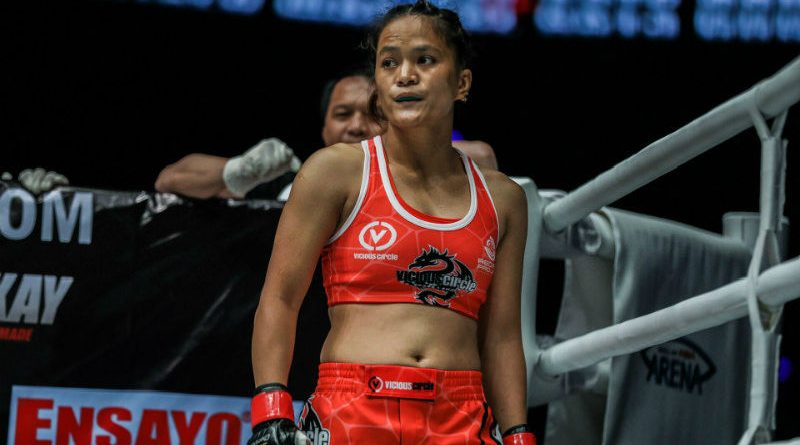 …because unlike the men, these women prioritizing the job over mother duties could result to dire consequences to the unborn child or young toddler whenever some reality strikes.

Such is the recent case of Team Lakay’s Gina Iniong.

Her’s is not about a regular 8:00 to 5:00 routine job. It is a job that is not really available to a common working man because of certain conditions, one that can be only given to a “specialist”.

Just as our print version is about to go to the press for its June 7, 2020 issue last week, ONE Championship let the cat out of the bag, informing their thousands of fans in their website that the recently wed “Conviction” is actually expecting her first baby with husband Richard.

It was just ironic that the timing of this personal momentous event for Iniong came during one of most intriguing times possible.

Just over a month ago, local fight fans became ecstatic when ONE Championship released its first ever rankings and confirm Iniong could be headed straight to a lucrative MMA career as she was right in the mix for the top prize of the ONE women’s atomweight division.

In case you hadn’t noticed, this division is full of female MMA superstars that dominate ONE headlines and Iniong is one of the personalities who can give the Philippines a chance to control this weight division.

Like how Joshua Pacio, Rene Catalan, and Lito Adiwang currently do in the men’s strawweight division, a pair of Filipinas, Iniong included, can rule the women’s atomweight for a considerable time if their “lucky stars” will just align to put them in the right conditions.

Let’s do a quick roll call of who’s who in this division:

(1) The current champion is Angela “Unstoppable” Lee, the famous Canadian-Amercian national who represent Singapore because of her Chinese-Singapore and Korean descent. She is 10-0 against atomweights and defended her title four time since winning it on May, 2016;

(2)  Thailand-based Filipina Denice Zamboanga, an unbeaten fighter who is set to challenge Lee anytime soon as sports goes back to normal, and

(3) Super Series atomweight kickboxing & Muay Thai World Champion Stamp Fairtex of Thailand. She is a friend and stablemate of Zamboanga and is also unbeaten in MMA fights at moment.

Winning a division like this comes with a certain prestige. And the two Filipinos involved could really put a stronghold for some time.

Thing is, Iniong is on the right track of setting a legit challenge for the throne. She riding a hot streak MMA career wise, her fiery assault only halted by the still on-going pandemic.

She is on a two-bout winning streak and winning 3 of her last 4 bouts including a domination of Asha “Knockout Queen” Roka in their women’s atomweight mixed martial arts battle during ONE: Fire & Fury on January 31, 2020 at the Mall of Asia Arena.

She pulled out a rabbit inside a hat for Team Lakay in registering the unanimous decision against Roka. She relied majorly on submission attacks, a very rare feat for this gym generally known for their stand-up, strike game.

While many Lakay fighters have shown tremendous improvements and seamless adaption of the grapple and ground game, Iniong could make a genuine claim of being responsible for ending the myth that Team Lakay’s Achilles Heel is their propensity to center their game on striking and being easily defeated when the action goes down the mat.

Overall, Iniong is 5-2 in ONE Championship since winning her first bout in the promotion on April 21, 2017.

In addition, she also won a gold medal for the Philippines in the 2019 Southeast Asian Games in kickboxing.

So, when the news broke out that she is about to take a long, long break from entering the squared circle, it could be fairly considered a “disappointment” in terms of the sports angle.

According to her coach Mark Sangiao, Iniong actually even thought of permanently hanging her gloves. “She thought about retirement.” Sangiao said in a ONE interview.

She even had planned for it way ahead. “Even before the SEA Games, she was telling me that she wanted to focus on her family. She said they’re getting older and they already want to have a child,” Sangiao explains.

No, this is not to diminish the importance of deciding to put family first over an MMA career, it should not even be close. Really.

As Sangiao aptly put it: “This is such a huge blessing for her. She wanted this for a long time, and it was given.”

On the other hand, Iniong’s pregnancy could not have come at another perfect time when related to her MMA career.

This is so because the conduct of contact sports events, especially those with multi-nation participation like ONE, are shelved for a considerable time, probably until 2021 or even 2022.

With no expected fights in about one to two years, Iniong’s wishes to extend the family tree were well placed, giving her the possibility of a comeback in the ONE circle given she is only 29.

And Sangiao altogether knew this. “I told her to focus on her pregnancy and then maybe she can make decisions after if she really wants to stop”, he said.

He’s right. Serena Williams, probably the best female tennis player ever, did just that at age 35. Williams announced that she was then 20 weeks pregnant on April 19, 2017 and eventually gave birth to a daughter on September 1, 2017.

She eventually made a complete return to highly competitive tennis on May of 2018 by participating in the French Open.

Difference is Williams did plan from the very beginning to return to tennis. She knew she will be playing again after her child is born.

Iniong could learn a thing or two from Williams because while tennis is not a contact sport, it requires much more mobility and endurance when compared to MMA.

Of course, having a child during this pandemic is altogether another story in itself and Iniong and her family must have understood the consequences of such, a topic this page is not qualified and chooses not to discuss.

Cordilleran fight fans would surely miss Iniong’s presence in the ONE fight cage and her chance to exchange mitts with the competition rich ONE women’s atomweight division.

Her Team Lakay mates must have felt the same but are one with her as Sangiao confirmed Iniong is out indefinitely and Team Lakay is firmly behind her decisions.

“We cannot really tell if Gina Iniong will return,” Sangiao continued. “It’s her decision. We cannot really say. It’s her life and whatever she does, we’ll support her.”

Iniong’s case is a good sample of how life sometimes throws curveballs to anybody, forcing them to make difficult choices.

Like this reality that a supposed normal event for a regular family has different consequences if it happens to a specialist involved in an unusual job.