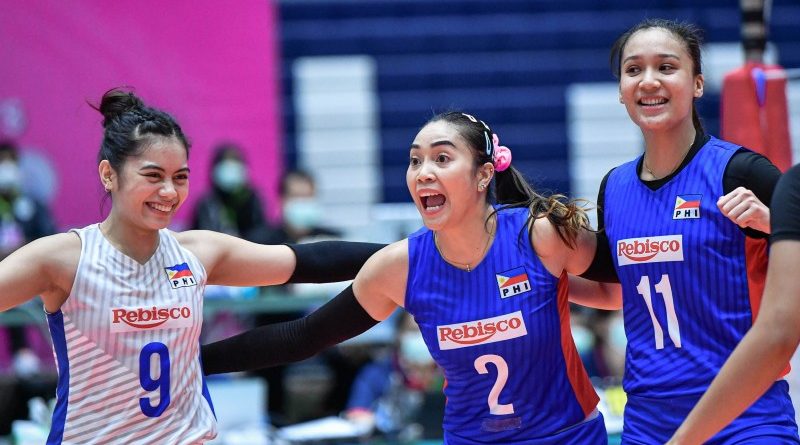 “The girls are enjoying themselves”.

I heard this line during the Philippine version broadcast of the 2021 Asian Women’s Club Volleyball Championship held early October, 2021 in Thailand.

This is a visual description I also often hear from Filipino commentators during volleyball games played by women.

In contrast, I don’t hear this often from foreign commentators of volleyball games.

I very seldom hear this from Filipino commentators during PBA, NBA, WNBA, MLB, NFL, MMA, boxing, and billiards broadcasts. Not even in WWE commentaries where the competition is scripted.

To be fair to the broadcasters, many of the Filipina spikers do exhibit smiles and happy faces almost everytime a rally has been completed, even when their team losses the point.

Not that there is anything wrong about this but the situation really puzzles me because in Philippine sports, it is only in women’s volleyball that this behavior is generally exhibited, which really puzzles me when done especially after a point lost.

This is not a criticism or attack on this culture. It’s just a wonder, an inquiry. What’s with this mentality and how does it help a team bond and win?

This behavior again happened in the 2021 Asian Women’s Club Volleyball Championship held on October, 2021 at Thailand where a two-team Philippine contingent badly finished at the bottom of the seven-team tournament.

It was difficult to see players from the Philippine National team dance and kid in front of the cameras during a team challenge lull when they were being walloped badly by the foreign opposition, pummeled at almost every turn.

I really preferred Kalei Mau, Captain Abby Marano, or any veteran on the floor instead gave the team a pep talk that resembles something similar to a Robert Jaworski, Tom Brady, or Kobe Bryant speech during the play stoppage.

Well, it also reminded me of the Creamline Cool Smashers, who carried this mantra for sometime.

When a strong team like Creamline use the “play happy” mentality, I would have understood it a bit. It would be generally effective for this team because their talent composition is generally much, much better than the rest of the field and the “happy” mentality takes away the pressure, I assume.

In the end, the team’s overflowing talent will eventually prevail over the opposition.

But it would be disastrous when teams belonging to the middle to lower tiers adapt it.

I am sure to a certain extent it won’t work for these teams like how it did for Creamline because the team will generally be under fire. A sense of urgency is badly needed almost every time and when the talent is not enough to overcome the challenge, an adrenaline push could do the trick.

That’s why I was puzzled when the Philippine National teams competing in 2021 Asian Women’s Club Volleyball Championship adopted it given the level of competition they were up against.

Based on watching the likes of Barangay Ginebra, the New England Patriots, and the recent Tampa Bay Buccaneers, all known for making comebacks from big deficits, “playing happy” is not a conducive culture towards winning when a team is playing one that is its equal and needs to one up them.

These comebacks are always characterized by “fiery” speeches and actions that provide sense of urgency to reverse a losing situation.

Even Efren Reyes, the light-headed man who makes fun of himself or his cuing during a bad shot do not display “happiness” during the match, especially when he is trailing.

While I find it hard to argue against this mentality given the constant success of the Creamline Cool Smashers during their impressive title run in the past, Cherry Tiggo’s comeback against them during the finals of the 2021 Premiere Volleyball league Open Conference backs my case.

The “fiery” Crossovers displayed the usual behavior when facing adversity and this helped them engineer a comeback that resulted to snapping the Cool Smashers dominance and winning themselves a championship in the hardest volleyball tournament in the Philippines so far.

When Cherry Tiggo was in danger of losing the championship after a frustrating Game 1 loss, the sense of urgency was clearly seen in faces and body languages of Jaja Santiago and company as they mount a rally in Games 2 and 3.

In contrast, it was difficult to assess if Creamline did have the same sense of urgency as seen visibly when it was their turn to be on the edge of a cliff in the stretch run of last two games

The smiling faces of Alyssa Valdez and company makes it  difficult to see if they were aware that the lead they built could evaporate in no time if they let up and that they had to push harder when it was their turn to catch up as the championship was on the line.

I don’t have anything against the smiles and happy faces the Cool Smashers are displaying during their games but I prefer Jaja Santiago, Dindin Manabat and the Crossover’s “fiery” screams and fist pumps when it comes to sports.

This what is usually referred to as “clutch time”. It is in this periods where the player/s who perform/s well wins the game for a team. Generally, there is no smiling at this time. Behavior of the best clutch performers is often characterized by “fiery” faces that results to steady play.

Besides, it it my opinion that smiling at an opponent during battle could be construed by the opposing side as disrespectful because the act is open to several interpretations.

Relax Creamline fans, I am aware that this is your team’s winning culture and was not meant to insult opponents.

By the way, I’m not asking for a “fiery” confrontation on this issue but would welcome a “happy” discussion if someone offers a rebuttal.

17       17SharesThis post has already been read 1097 times!The ongoing negotiations between the members of the city’s Public Private Partnership for