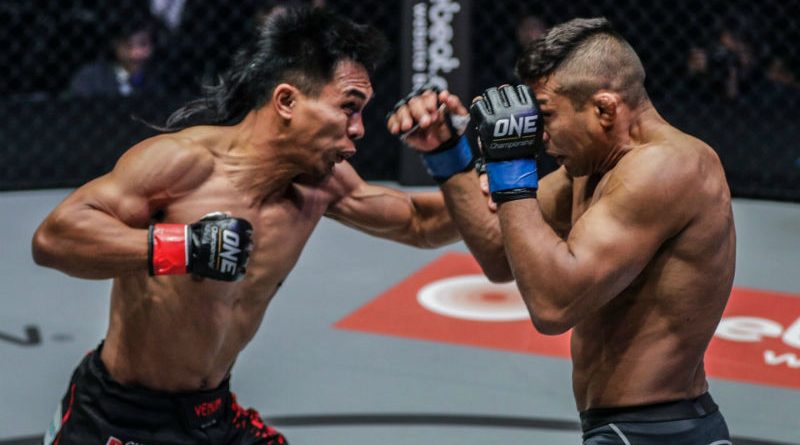 Stephen Loman made headlines this week as he decided to vacate his BRAVE bantamweight reign to relocate to ONE Championship.

As of press time, “The Sniper” and Team Lakay has not yet disclosed which weight class he would campaign in.

Just a few years ago, this division was hungry for legitimate contenders as the championship belt was basically fought for by Bibiano Fernandes and Kevin Belingon. ONE seemingly couldn’t find any worth challengers as it took three, almost four, title fights to settle the issue.

If Loman decides to campaign in the same weight class, he should not expect the same situation. The division has finally seen the rise of some worthy challengers.

According to ONE’s J. Furness, the promotion’s bantamweight mixed martial arts division features the most dominant World Champion in promotional history, yet the biggest threat could be coming from the current crop of contenders.

There are a plethora of skilled combatants who are ready to take their shot at the crown.

Here’s how he evaluated the grizzled veterans and rising stars of ONE bantamweight division who could pose a serious run for ownership of the belt, along with a sprinkle of my own takes:

The division’s reigning king Bibiano Fernandes is one of the promotion’s dominant champions with the longest reign.

In just 14 months since he first stepped into the Circle in August 2012, he established clearly that he was the man to beat at bantamweight.

By October 2013, Fernandes amassed a perfect 3-0 slate, winning the ONE Interim Bantamweight World Title against Koetsu Okazaki and then claiming the division’s undisputed crown with a victory over Soo Chul Kim at ONE: TOTAL DOMINATION.

Since then, the Brazilian legend has defended his throne eight times, more than any other divisional king in ONE history, with the only blemish coming via split decision to  Belingon back in November 2018.

Following that loss, Fernandes quickly won the title back in March 2019 and then cemented his status at the top with an even more convincing victory over Belingon by submission a few months later.

He clearly got the number of his Team Lakay rival, winning three of their four previous meetings, two by abbreviated finishes. This probably prevented a fifth fight between the two despite the lack of challengers for the title. Fernandes still has to defend his title since that October, 2019 Belingon fight.

Fernandes was narrowly bested by a striker in his only loss on the global stage and nobody has been able to out-grapple the BJJ World Champion so far.

The top contender bantamweight contender needs very little introduction to Cordillera fans of ONE. This Brazilian who packs a punch dealt their own knockout artist Kevin Belingon his first career KO loss.

There’s no doubt that Lineker’s blistering striking arsenal would make for a thrilling encounter against Fernandes’ world-class Brazilian Jiu-Jitsu, with both men capable of beating anybody in the world in their area of expertise.

This skilled grappler hasn’t lost at bantamweight since 2014, and he owns a mammoth run of eight straight wins in his favored weight class.

He currently owns a 20-5 record with one no contest. 11 submission victories that evidenced his dominance in the ground game. Among his victims was Adriano Moraes.

Kamikubo is a formidable Japanese wrestler currently holds the #5 contender spot and is sporting a MMA fight record of 11-1.

He recorded four consecutive wins in ONE, barely losing a moment of any of those contests, thanks to his high-pressure style that’s laden with ground-and-pound.

Andrade is a rising star who exploded onto the scene in 2020 and quickly established himself as a prominent threat in the division. He currently has a 5-2 fight record.

The Brazilian Muay Thai stylist outstruck and then submitted Mark “Tyson” Abelardo in his first promotional outing and engineered a phenomenal blend of striking and defensive wrestling to best the surging #2-ranked bantamweight contender Shoko Sato at ONE: UNBREAKABLE III earlier this month Sato over three rounds.

In the recent past,  the third ranked contender was A-1 to Fernandes A.  For a couple of years, Belingon was the only man who posed a real threat to “The Flash”, their fued ending in a triology.

Belingon is the only man to beat Fernandes in ONE, although his recent defeats have him skidding down the ONE official rankings.

Still, the Team Lakay knockout king couldn’t be removed as a perennial contender yet as he come at his opponents with intensity and could end a fight with a single hit.

This post has already been read 2614 times!LA TRINIDAD, Benguet – The provincial government is studying the possibility of gradually