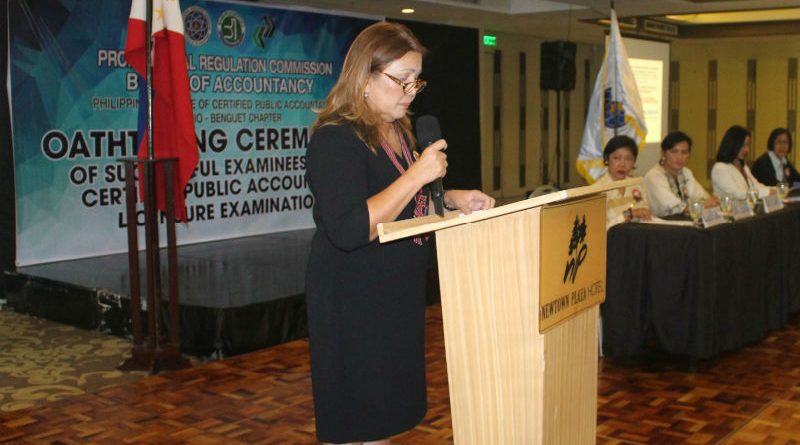 Baguio City – Professional Regulation Commission (PRC) – Board of Accountancy (BOA) member Arlyn S. Villanueva emphasized on 78 newly inducted Certified Public Accountants who took their oath of office last June 25, 2019 at the Newtown Plaza Hotel, here, the effects of technology in accounting and the role of CPAs in their midst.

Villanueva, a previous president of the Holy Angel University, reminded the new CPAs the effects of technology infiltrating business processes including accountancy. She elaborated the eventuality that machines and robotics will take over a lot of the functions of the accountant and emphasized to these newly installed professionals that they have to integrate themselves to this eventuality.

She also stressed the developing of skills of accountants not only of the recording function but also on analytics which could not be done by machines.

Lastly, Villanueva commended the passers who took their licensure examinations in Baguio for being one of around 10 who came out successful.

Villanueva reported that while the national passing rate during the May 2019 CPA licensure exams was 16.5%, the actual passing rate from the Baguio candidates was around 10%.

The University of the Cordilleras led CAR schools in success rate with 42% passing rate.

Aside from being its past president, Villanueva had served Holy Angel University in various capacities for more than 30 years. She is currently an independent Director of the Metro Pacific Transport Corporation and the Manila North Toolways Corporation. She had also held positions for PICPA and the Philippine Association of Collegiate Schools of Business and have been an Outstanding Accounting Educator and Ulirang Ina Awardee.

A total of 18 schools located in Luzon participated the oath-taking ceremonies. Passers from Cordillera Career Development College, King’s College of the Philippines-Benguet, Mountain Province State Polytechnic College, Saint Louis University, University of Baguio, and University of the Cordilleras were in attendance for CAR-based schools.

On the other hand, Arianne K. Dalay-on, a passer from Saint Louis University, spoke in behalf of her co-passers. She acknowledged the fact that many of them did not aspire to become accountants when they were entering college, their challenge of being subjected to a lot of book-reading during college, and relished the support of their love ones now that they were able to march out of the process successfully.

She also challenged her new colleagues to observe the social responsibilities, integrity, and honesty in practicing their newly found profession.

The ceremonies was organized by the Philippine Institute of Certified Public Accountants (PICPA), Baguio-Benguet-Mountain Province Chapter, whose officers for the incoming fiscal year, headed by incoming president Edna D. Degracia, were also inducted to office.

Also gracing the event are Juanita L. Domogen, the OIC_of PRC-CAR and representatives from the Baguio schools.