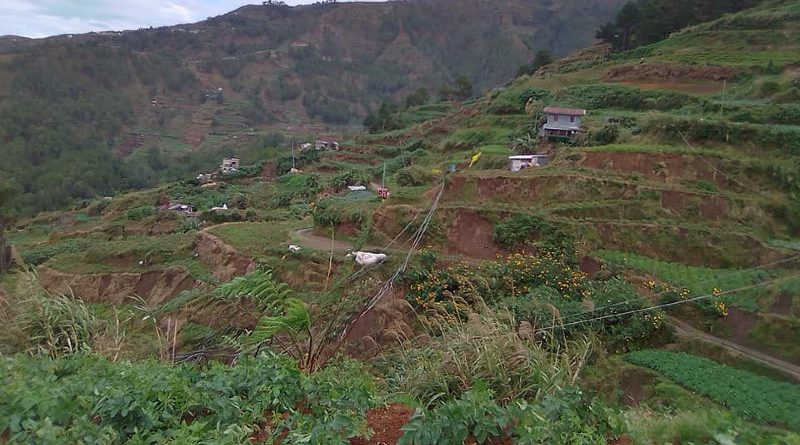 MANKAYAN, Benguet – Some seventeen households in a remote sitio are now eagerly awaiting the completion of the ongoing energization project that will bring quality and cheap power to their place following the erection of some poles required to string the power lines in their area.

Poblacion Punong Barangay Mateo Batane, the assigned jobber of the Benguet Electric Cooperative (BENECO) in the Buguias and Mankayan areas, stated that the ongoing energization project will be completed next year following the restoration of the funds that were earlier garnished by the national government for the implementation of the aggressive anti-Coronavirus Disease 2019 (COVID-19) response activities.

He added that the initial 6 poles that were erected from the tapping point in nearby Cotcot, Buguias that strands to more than 650 meters was funded from BENECO’s internally generated funds while the approximately P1 million required to put up the additional 14 poles, string more than 1.5 kilometers of power lines and put up additional transformers in the area was restored under the annual budget of the National electrification Administration (NEA).

The initial erection of the electric poles received positive remarks from the netizens who expressed their appreciation to the efforts that had been shown by the municipal government headed by Mayor Frenzel A. Ayong who work extra hard in making the needed representations with BENECO for the realization of the energization project.

Sitio Napetkew, Bato in barangay Bulalacao can be reached by having to pass through barangay Cotcot, Buguias town as there is no road that was built in the past from Bulalacao to the said remote village.

The netizens voiced out their confidence in social media for the realization of power in the remote village as the same had been deprived of such service over the past several decades.

Batane claimed that the upcoming funds to complete the project is part of the government’s Sitio Electrification Program (SEP) pursuant to the mandate of NEA to bring quality and cheap power to the rural areas in partnership with the established electric cooperatives that are now operating in the different parts of the country.

Mayor Ayong admitted that the households from the said sitio have been really deprived of such a basic need that is why the municipal government worked hard to find ways and means on how to help them bring their concern to the authorities which was previously realized.

“We do not want that there will be people in our municipality who will be left out from the basic services being provided by concerned government agencies and the local government. We were just wondering why power was able to reach one of our remotest sitios which is Las-igan but it was not able to reach Napetkew, Bato when it is nearer to a road although passing through Cotcot, Baguias,” Ayong stressed.

The mayor pointed out that he will try to make the appropriate representations with BENECO and concerned government agencies to ensure that remote villages in the municipality that are not yet energized will be included in the electric cooperative’s road map in the implementation of the government’s rural electrification program to help spur economic activities in the countryside since power is one of the major factors in improving the state of the local economy in the locality.

17       17SharesThis post has already been read 1005 times!The ongoing negotiations between the members of the city’s Public Private Partnership for