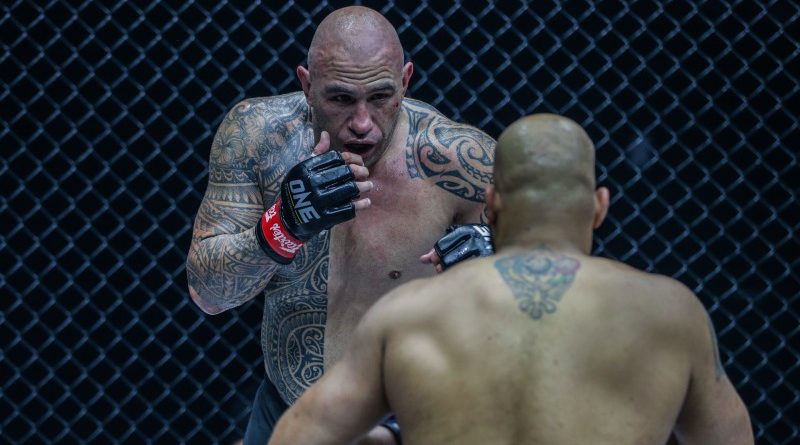 Arjan “Singh” Bhullar brought reigning heavyweight king Brandon “The Truth” Vera to the mat and pounded him to score a second round technical knockout and dethrone the longtime ruler of the division during the main event of  ONE: DANGAL, a tape-delayed event from the Singapore Indoor Stadium aired on May 15, 2021.

Bhullar’s capture of the ONE Heavyweight World Title also made him the first Indian Mixed Martial Arts World Champion in history.

Bhullar cautiously approached Vera in the first round, looking to string together combinations to set up a takedown. The Indian star stifled Vera with feints and strikes, freezing the Filipino-American on his feet and making him hesitant to engage. Bhullar took Vera down toward the end of the opening frame and controlled him on the mat.

In the second round, Bhullar capitalized on his feints by catching “The Truth” with an overhand right that sent him reeling toward the Circle Wall. A few more right hands compounded the damage, and a debilitating body shot had Vera gasping for air. Once “Singh” was able to close the distance and latch onto the defending World Champion with a body lock, it signalled the beginning of the end. Bhullar brought Vera to the mat and pounded him out for the technical knockout victory.

Operating behind a furious offensive, Tawanchai attacked with force, showcasing leaping elbows, laser-like punching accuracy, and his signature left kick. A left hand dropped Clancy in the first round, but the Irishman was able to recover. In the third and final frame, a solid left roundhouse kick to the jaw ended the fight abruptly.

Official Results for ONE: DANGAL