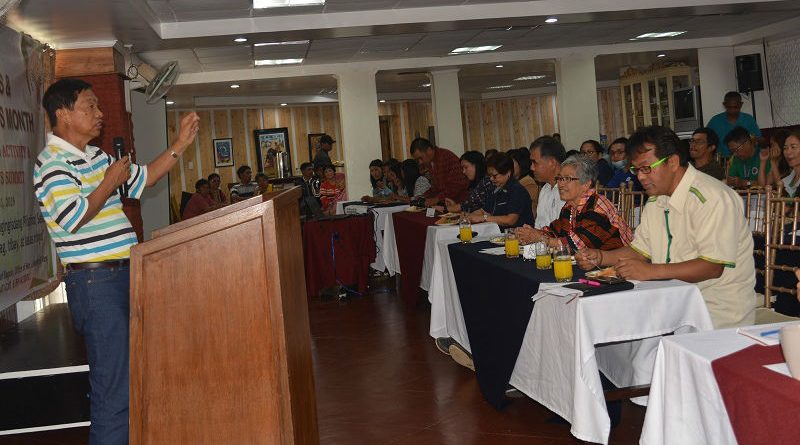 BAGUIO CITY  – Mayor Mauricio G. Domogan urged hundreds of urban gardening practitioners in the city’s barangays to continue their passion to produce healthy food to help in providing the supply for the rapidly increasing demand for organically produced agricultural crops or healthy foods.

The local chief executive pointed out that by practicing urban gardening in available spaces in their residences, urban farmers are helping the local government realise its different programs and projects, especially in terms of food security and effective and efficient solid waste management.

“We urge other residents in the city’s different barangays to replicate the success of our brothers and sisters urban gardening practitioners. Putting up your own urban farms will definitely  significantly reduce the number of lazy people in our city,” Mayor Domogan stressed.

Resolution No. 035, series of 2017 provided for the annual conduct of urban farmers month in Baguio City while Ordinance No. 75, series of 2018 provided the funding requirement in the amount of P300,000 to bankroll the activities lined up for the celebration of urban farmers month every May wherein all the legislative measures were authored by Councilor Leandro B. Yangot, Jr., chairman of the City Council Committee on Market, Trade, Commerce and Agriculture.

For his part, Yangot assured the urban farmers that even if he and Mayor Domogan will be private citizens, they will extend whatever assistance they could to ensure the successful practice of urban gardening in the different barangays and for urban farming practitioners to continue to increase considering the importance of their contributions to the supply of organically produced agricultural crops in the city aside from contributing in efforts of the local government to reduce the volume of residual waste being hauled out of the city.

According to him, he will remain as an urban farmer and expressed his willingness to use his urban garden in his residence as a learning site for interested urban gardening practitioners to replicate.

The annual urban farmers month is spearheaded by the local government through the newly created City Agriculture Division under the City Veterinary Office through the initiative of Councilor Yangot and Mayor Domogan.

With the increasing demand for organically-produced agricultural crops, concerned agriculture stakeholders in the city are encouraging more residents to convert their backyards into urban gardens to produce crops not only for the consumption of the members of their families but also for the people who patronize organically produced vegetables and fruits.

Yangot noted that from a small number of organic agriculture practitioners from a few barangays in the city, the number of urban farmers has significantly increased over the past three years and the number of urban gardens has also expanded to idle lands in the different barangays but there is still a need to empower more residents to be involved in the environmentally friendly activity for the benefit of better health among the populace.