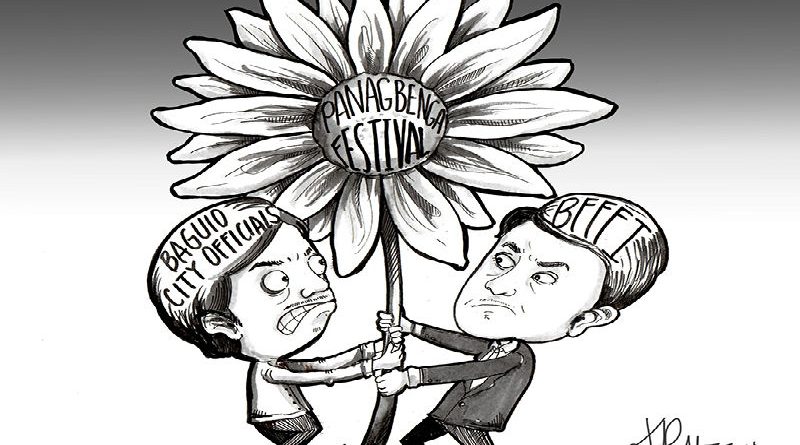 In 1995, the private sector, particularly the then management of the John Hay Poro Point Development Corporation (JPDC) through its vice-president lawyer Damaso Bangaoet,  conceptualized a plan to address the challenge of sustaining business in the city during the low tourist season.  Businesses dependent on tourism usually suffer during these lean months. If there is such a public-private partnership, this initiative was its concrete expression. It was specified in the concept that the private sector and the local government will work together to find ways to sustain the pressence of visitors to the city to help grow the local tourism industry. This gave birth to the flower festival.  Baguio and Benguet were already known for their blooms especially during the month of February when flowers blossom, especially those intended for the celebration of Valentine’s Day. February, being in between the Christmas break and the schoolyear end, was a lean month for businesses.

Mayor Domogan offered the term Panagbenga as a brand name to the flower festival. The Kankanaey term refers to the season when something blooms, and in this case, it refers to the blossoming of flowers, a fitting reference to the season. Panagbenga has now become the city’s most famous annual crowd-drawing event.

The initial conduct of the festival was done through the so-called government-led and private sector-supported concept that paved the way for the organization of the Baguio Flower Festival Foundation, Inc. (BFFFI). This was composed of a balance between representatives from the government and the private sector. Sometime in 2002, the local government decided to take over the handling of the major flower festival events that lasted for a few years. In 2005, the local government decided to return the management of Panagbenga to the BFFFI following a series of controversies that rocked the staging of the festival events which now form part of its rich history.

The events for the month-long festival had always been a success. However, the issue of transparency and accountability always comes out to which the BFFFI had time and again addressed. It published its audited financial statement in various local publications for the information of the public through the years.

Both the private and the government sectors deserve credit for the achievements of Panagbenga but the organizers should not forget that the contribution of the residents of the Cordillera and visitors significantly helped Panagbenga gain the status it has now – a globally recognized event. For the festival’s 23rd edition, city officials are again trying to grab the limelight from the BFFFI by reorganizing the Panagbenga Executive Committee and the working committees. It is awkward to see the local government contributing only P4 million for the cash prizes of winners but having control of most of the festival’s major events while the BFFFI that generates more than P8 million from the festival’s income-generating activities is now taking the back seat.

Is there a gold mine in there that local officials are so interested in personally managing the major festival events? Is there an election next year? Just asking.

People are also asking if the city government is ready to shoulder the full financial costs of the Panagbenga in case institutional sponsors of the event will back out? Will there be the same excitement of residents and visitors in the grand streetdancing and grand float parades if the release of the prizes of the winners will be delayed for nearly a year? Will there be greater participation among schools and sponsors if the local government handlez the event and city officials will be at the helm?

The previous set up in the organization and management of the flower festival be maintained as it is a tried and tested arrangement. Let us not gamble the future of the festival with city officials who might not be familiar with the corporate practices of the private sector partners. The successful conduct of the events that will depict a good image not only of the local government but of the people of Baguio as a whole should be the prime consideration and not who is organizing what.

Local officials should not insist that they are experts in event organizing even if they have experience in doing so because as a collective, that is not their function. This task must be left to the practitioners of corporate event organizing because in the end, that is what Panagbenga is – to bring business to the city. Let us leave the matter to the experts and bestow our full trust and confidence with them as partners of the local government for the sustained success of the city’s major crowd-drawing event. Let us not allow the gains of the past be simply ruined by the personal and political interests of a few.