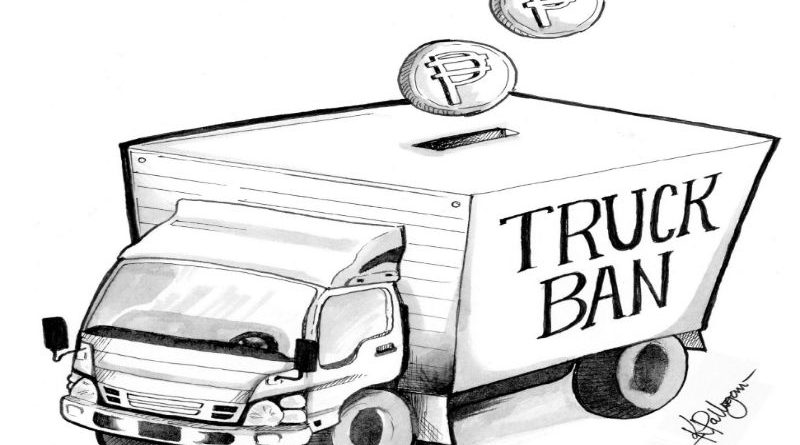 The City Council crafted Ordinance No. 05, series of 2017 otherwise known as the city’s revised truck ban to reducing the monstrous traffic jams around the city, especially during rush hours, that delay people from going to their work, school, businesses. and other important transactions. Under the ordinance that took effect last March, heavy trucks are prohibited from traversing the major roads in the city from 6 am to 9 am and from 4 pm to 9 pm daily.

At the start of its implementation, the ban received serious criticisms because it failed to consider the case of trucks loaded with perishable goods, water delivery trucks, gasoline tankers, trucks involved in the delivery of construction materials for government and private projects around the city and trucks loaded with mine ore concentrate or finished products from the different mining companies among others. It was observed by some quarters that the ordinance was not subject to due diligence. It was pointed out that if there were enough consultations done among affected sectors, the problems that transpired should have been addressed at the level of the legislators before the ordinance was made into law.

The implementation of the ordinance which included a stiff fine of P2,000 for the first offense, P3,000 for the second offense and P5,000 for the third and succeeding offenses, created an uproar among the affected sectors because it could significantly have negative impacts on the lucrative vegetable industry of Benguet, the main source of livelihood of majority of its people. Sensing the serious negative impact of the strict implementation of the truck ban to certain critical sectors of the society and even the local economy, Mayor Mauricio G. Domogan convened a meeting among local officials of La Trinidad led by Mayor Romeo Salda and officers of the affected different truckers associations. Because of the tedious process of amending the law which will take some time, it was agreed then that the city mayor will issue an administrative order granting exemptions to several truckers from the coverage of the truck ban as a temporary measure while awaiting the city council will work on appropriate amendments to the ordinance. The order was made provided that it shall be subject to confirmation by the local legislative body because nowhere in the ordinance authorizes the mayor to grant exemptions from the coverage of the measure.

However, when the order was sent to the City Council for confirmation, some members claimed the administrative order was an executive amendment to the measure, thus, they did not confirm it. Again, it was brought back to the council with a covering resolution from the city’s Traffic and Transport Management Committee (TTMC) seeking the confirmation of the same or the passage of a resolution temporarily suspending the implementation of the ordinance while the legislative body works on amendments to the ordinance. Again, it was returned to the mayor unacted.

During a recent public hearing called by the concerned Council committee to deliberate on the proposed amendments to be introduced, all the sectors supported the implementation of the truck ban but there should be exemptions to cover some critical sectors which are engaged in the delivery of basic services, among others. Further, those who want to be exempted must pay exemption fees which would be equivalent to P300 per day similar to the passage fee being paid by vehicle owners wanting to be exempted from the coverage of the number coding scheme.

We are saddened to learn that there are some local legislators who are inconsiderate, insensitive, illogical and arrogant on the plight of the concerned sectors wanting to seek the exclusion of their trade from the coverage of the city’s truck ban ordinance. Instead of helping spur economic growth, some local legislators obviously want the sources of livelihood of ordinary people to be jeopardized by policies that simply do not conform to the general welfare clause.

We believe the imposition of excessive, oppressive and confiscatory fees in the guise of regulating the entry of trucks to the city is a sign that city officials are not in tune with a wider constituency which is vital to the functioning of a vibrant economy. We cannot avoid agreeing to the conclusion of observers that the city’s truck ban is a form of money-making measure of the local government and not really to regulate the use of the streets by heavy trucks.

We call on our local legislators to respond to rational demands of the wider society for consideration. If they have concerns with the use the city streets, this must be referred to the relevant sectors. At the same time, legitimate practical demands must be considered, like the demands of these affected truckers. There had been enough about this matter that had been brought to the attention of the Council. If they do not want to have any amendment to the law, can they not institute other measures? May we remind this body that Baguio City is a beneficiary of the businesses outside of the city, the vegetable industry and mining in particular. Let us not actually kill the hands that feed us because it is the province’s vegetable industry that is keeping the city economically vibrant.

This post has already been read 656 times!It’s a rare sight to see Team Lakay fighters seethe and seemingly lose