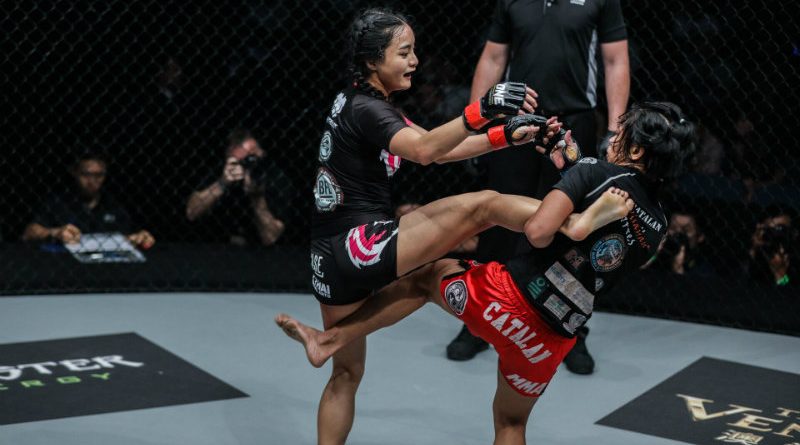 Jomary Torres tries to follow-up her scintillating victory over Rika Ishige Last August as she, along with three other Pinoys, is penciled to appear in the preliminary card of ONE: Heroes Dream on November 3 at Yangon’s Thuwunna Indoor Stadium.

Torres created one of this year’s biggest MMA stories when she delivered an upset by submitting the heavily favored Ishige in dramatic fashion.

Torres came back from three takes downs in the first round, including sneaking in a double leg kick to the gut right from the bottom that dropped Ishige on all fours, caught a kick from Ishige, dropped her with a right, and finished the bout with a rear naked choke in the second round.

The Zamboanginian Fighter how has a chance to prove her win was not a fluke as goes up against Indonesian Nita Dea, who lost her debut MMA fight against Ishige.

Also seeing action in main card of the event are Eugene Torquero, Bernard Soriano and Jeremy Miado, all trying to bounce back from losses in their last bouts.

Torquero hopes to ground “The Southern Eagle” Ma Hao Bin in a flyweight bout and snap a three-bout losing streak.

The Jaguar” Miado takes on Pongsiri “The Smiling Assassin” Mitsatit in a strawweight bout hoping to improve his career record back on the winning side after absorbing his third loss against three wins.

The “Hitman” Soriano, who won his first six career bouts, tries to dismantle the “Rock Man” Chen Lei in a bantamweight match, hoping to avoid a losing streak after absorbing his first career loss from compatriot Robin Catalan last April.