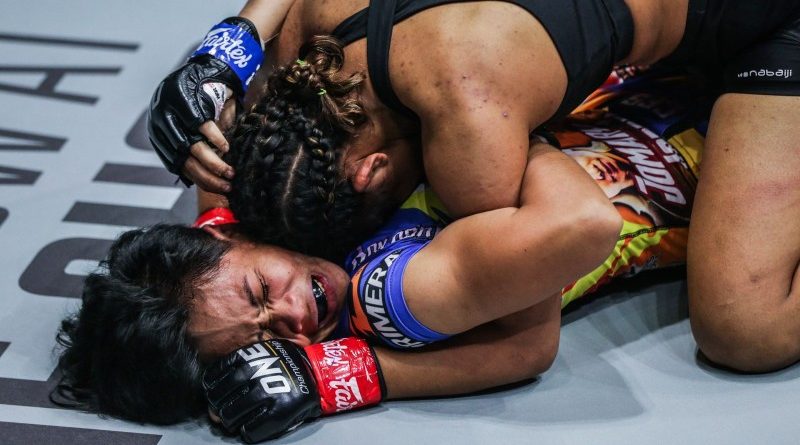 Jomary Torres and Rene Catalan could not solve their more illustrious opponents as they fell victims of first round knockouts during ONE: Big Bang held last Decembedr 4, 2020 at Siongapore.

Ritu “The Indian Tigress” Phogat used her wrestling as she took the action to the mat and rained elbows to a hapless Torres to force the referee to stepped in to wave off the bout in the first round.

On the other hand, Catalan could not stop the onward march of Bokang Masunyane to a title shot as the “Little Giant” un leashed a head kick that put out Catalan in the second fastest ONE knockout.

The Filipinos came home empty handed during this trip as Team Lakay’s Danny Kingad’s scheduled bout with Kairat Akhmetov was forced to be cancelled due to the positive COVID-19 test result of a Team Lakay cornerman.

Torres was supposed to give Phogat her toughest test to date but the Indian sensation passed with flying colors to remain undefeated in her mixed martial arts career.

The Indian Wrestling Champion stopped her Filipina rival with an unanswered salvo of ground strikes to earn her 4th win in just a year.

Phogat popped out a jab and a hard low kick to open up their atomweight clash at the Singapore Indoor Stadium to which Torres replied with a thudding low kick of her own.

The duo exchanges fists in the ensuing action until Phogat went back to her wrestling roots and timed a double-leg takedown and dragged the action to the canvas.

From there, the Evolve star chipped away with short punches and elbows but the Catalan Fighting System athlete defended the assault well.

Phogat’s relentless pressure began to pay off as she broke through with some hard hammerfists. Torres tried to bridge out to escape, but the Indian wrestler quickly passed to side control to set up the finishing sequence.

She used her right leg to trap the Filipina’s left arm and secured a dominant crucifix position and upped the intensity with punches and elbows.

With Torres unable to use her arms to defend herself, “The Indian Tigress” then let rip with a stream of elbows until the referee stepped in to wave off the bout at 3:55 of round one.

This flawless performance by Phogat, is her second knockout win in the first round and fourth win in as many fights. She should be closer to a spot in ONE’s Athlete Rankings.

Meanwhile, Torres slide continues to spiral as she suffered fifth straight after going 4-0 with one no contest. All in all, she couldn’t come out with a win in her last six fights.

On the other hand, Masunyane’s 37-second win was the second-fastest victory in strawweight history, just behind Adrian “Papua Badboy” Mattheis’ 22-second KO of Rustam Hutajulu back in 2016.

Catalan started the match aggressively, throwing a stiff leg kick followed by a left hook, while Masunyane responded with a head kick that missed the target.

“The Challenger” then switched gears and started pursuing takedowns to which the “Little Giant” countered with a knee to the body, prompting the Filipino to move back.

Masunyane then perfectly timed a head kick that found its mark withy his shin landing flat on the Filipino’s jaw, sending Catalan crumbling to the canvas and forcing the referee to immediately wave off the match.

The undefeated South African pushed his record to 8-0 and made his case to enter the strawweight division’s top-five rankings.

“I’m the best in my division. I’d like to challenge the champion,” Masunyane said. “If the champion is not ready, I can fight the number one or number two [contender]. Give me a title shot.”

Catalan is now on a two fight losing streak and saw his MMA career record drop to 6-4 with one no contest. He has a six-bout winning streak sandwich by two losing streaks.

He lost two straight during his early fights in ONE and was submitted by Pacio before his latest loss.

Full results of ONE: Big Bang

Marat Grigorian defeats Ivan Kondratev via knockout at 1:52 of round two

Bokang “Little Giant” Masunyane defeats Rene “The Challenger” Catalan via knockout at 0:37 of round one

Ritu “The Indian Tigress” Phogat defeats Jomary “The Zamboanginian Fighter” Torres via TKO at 3:55 of round one

6       6SharesThis post has already been read 2254 times!LA TRINIDAD, Benguet – The provincial government is studying the possibility of gradually