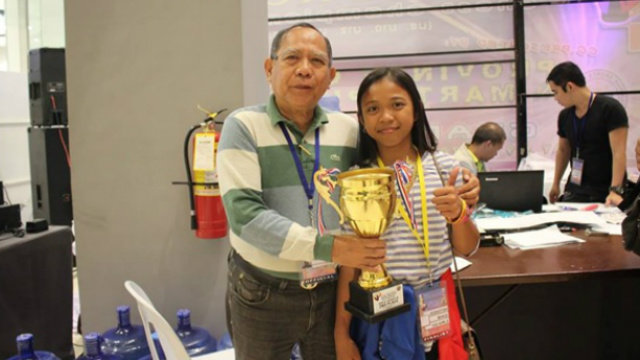 Torre, the Philippine delegation head said Sebastian has been endorsed by the National Chess Federation of the Philippines (NCFP) due to her excellent performance in the 2017 National Age Group Chess Championship held in Cebu City last May.

According to Torre, there will be four (4) standard and two (2) rapid games and Sebastian will be playing in the 12 years old and under category. He said Sebastian so far is the only player who will be coming outside the Metro Manila area.

The NCFP Executive Director Red Dumuk has sent letter to Apayao Governor Elias C. Bulut, Jr. informing him for the selection of Sebastian as one of the elite players who will battle the talented chess squad of Indonesia. According to Dumuk, Sebastian was named as one of the members of Team Philippines on the strength of her runner-up finish in the 2017 National Age Group.

Sebastian joins other promising chess young stars of the Philippines Fide Master Allaney Jia Doroy of National University, Jerlyn Mae Sandiego and Daren dela Cruz both of Dasmarinas Cavity in the girls division. International Master Jan Emmanuel Garcia will lead the boys division with Stephen Rome Pangilinan, Daniel Quizon and Mark Jay Bacojo as his teammates. The above players had already been into numerous international competitions bagging medals for the Philippines.

Indonesian Chess Federation chairman GM Utut Adianto has coordinated with GM Torre for this friendly match between the two nations in which they will match their best players in agreed respective categories.

The parents of Sebastian expressed their appreciation to Torre and Dumuk for choosing their daughter to be part of the Philippine Team for this prestigious tournament. “It is an honor for us and our Province that Mhage has been selected among the equally talented woodpushers of the country. It is always our desire and Mhage’s dream to consistently represent the Philippines in international competition.”

Sebastian’s parents said they were surprised when the well admired chess living legend called them one Friday morning and announced the inclusion of Mhage. “This is indeed a rare opportunity considering that there are also other talented players in the metropolitan. We pray that Mhage and her teammates can overpower their opponents in this duel,” they said.

Torre believes that these young generations of chess players Sebastian included will once more banner the name of the Philippines showcasing the innate capabilities of Filipinos in international arena in this mind game.

It can be recalled that Torre became the first Grandmaster in Asia in 1974. Until today, he has been a prominent player and a chess figure not only in the Philippines but in the world. He once beat former world Champion Anatoly Karpov and had been part of chess genius Bobby Fischer’s seconds when Fischer defended his world title against Boris Spassky.

(Ed note: A modification was made to our original story. As pointed out by one of our readers, Torre did became Asia’s first grandmaster in 1974, not 1984 as mentioned in the original story, when he was just 22 years old by winning the silver medal in the Chess Olympiad held in Nice, France. )