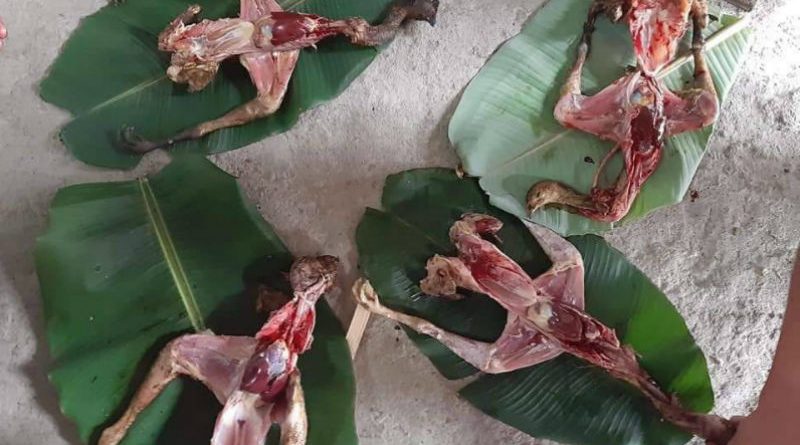 A new sport, if it could be realistically referred to as such, was born in the recently concluded Indigenous Peoples Education Congress last September 26, 2019 by the Department of Education (DepEd) – Benguet Division.  These is the “Bayu Challenge” and the “Devak ni Manok” or otherwise known as the “Pinikpikan Challenge”, a competition included during the congress.

The competition was inspired by the preparation of the well-known chicken delicacy of the Cordilleras and the culture attached to this cuisine.

The mechanics and ground rules of the competition include participants using a stick, firewood and a lighter or a match. One male and one female will lightly beat the live chicken with a stick in the body, the wings, and the neck until the blood rises beneath the skin. They will beat the head last if the chicken is still alive.

They will cut a small incision on the neck to include the esophagus then using the hand, slip beneath its shoulder blade to separate the rib case from the chest. They will also cut the thigh, referred to as “pigwak”.

The competition was judged using the following criteria: the participants attire which should be native or ethnic, the speed in performing and the overall outcome or output which includes the feathers being properly burnt, the skin becoming brownish after burning, and if the coagulation of blood under the skin is just right.

“Pinikpikan” comes from the Ilocano term “pikpik” which generally means to “hit repeatedly”. Some also use the term to mean “to hit repeatedly in a soft manner” especially when pertaining to soothing a crying baby.

The cuisine was named as such because the chicken is struck repeatedly in a not so hard manner but just enough to build blood clots. This process influenced some to call it “killing me softly”, meant as a joke.

“Pinikpikan” is not just another native cuisine in the Cordilleras. Its history goes way back to appeasing the spirits whom the Cordilleran tribes worship before. It is also used in cleansing rituals and in rituals to help in decision making.

The bile or “apro” of the chicken and the visibility of the gall bladder are used to indicate good or bad omen. Up until today, some still make this cuisine and whisper their prayers for healing or for their love ones who are already dying.

Part of the Cordilleran culture also often includes the cooking of “Pinikpikan” as the main dish where the other rituals are performed.

Younger generation Cordillerans, however, cook “Pinikpikan” as the Cordilleran variant of “tinola” and is one of the most famous dishes in the region served in most of the local restaurants.