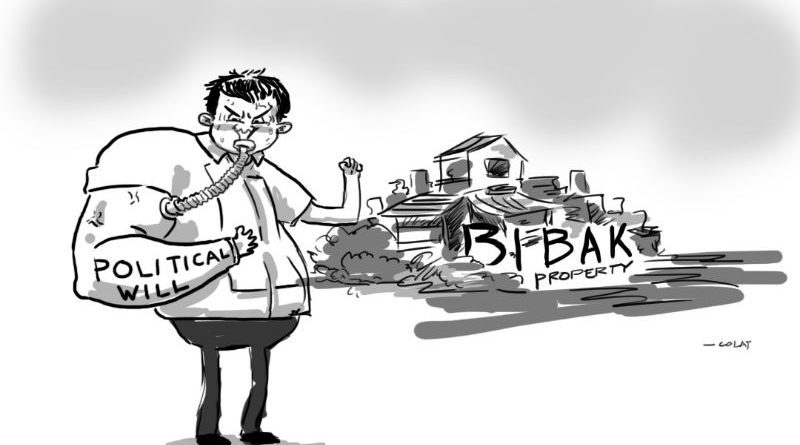 The 5,000-square meter property along Harrison Road is part of Original Certificate of Title No. 1 under the name of the Republic of the Philippines prior to its segregation from the declared reservation and subsequently ceded to the Bontoc-Ifugao-Benguet-Apayao-Kalinga (BIBAK) It was in the same area where two structures were erected that served as the dormitory for students from the Cordillera who were studying in Baguio City and pursuing their higher levels of education.

Ironically, the BIBAK dormitories were reportedly demolished sometime in the 1980s paving the way for the mushrooming of structures by enterprising individuals who used the said structures for profit by setting up their own business they are managing up to the present. Despite the absence of their proofs of ownership to the lands that they have occupied and the pertinent building and occupancy permits from the concerned department of the local government, the informal settlers occupying various structures were allowed and tolerated to occupy the lands that actually does not belong to them as well as earn from the said property at the expense of the Cordillera students who are in need of decent homes for several decades now.

In 2014, the Regional Development Council(RDC-CAR) in the Cordillera passed a resolution supporting the efforts of the City of Baguio to demolish the illegal structures erected on this BIBAK lot to allow the same to be used for the purpose that it was ceded for, i.e., as a dormitory for BIBAK students. The RDC-CAR resolution was bolstered by a letter from the Department of Environment and Natural Resources in the Cordillera that the occupants of the property have no evidence to show proof of their ownership of the lands that they currently occupy.

The most recent demolition order was issued last January. Before the implementation of this, the affected individuals executed a notarized commitment for them to voluntarily dismantle their illegal structures in the area on or before June 30 this year aside from withdrawing all the cases they filed against the city in the various courts and that their failure to comply with their commitment will compel the local government to demolish whatever structures that will not be demolished on or before the committed date.

Now that the deadline for the informal settlers to demolish their structures is fast approaching, they again passed a resolution appealing to city officials to defer the scheduled demolition date because their relocation area in La Trinidad has not yet been completed and that it will be difficult for their children to go to school among others.

We have to admit that those who are illegally occupying the BIBAK property are actually not informal settlers who need assistance because they have enriched themselves for decades at the expense of the BIBAK students. It is not acceptable that the uncompleted relocation area is used to again delay the scheduled demolition because most of them reportedly own houses in the different parts of the city which are in the name of other people just to make it appear that they are really informal settlers that must be given pity.

It is high time for the members of the inter-agency to be firm on their commitment. The informal settlers were already given more than enough time to transfer and voluntarily dismantle their structures in the area. Their reasons to delay the scheduled demolition seem to be a repeat of what had been time and again said in their previous petitions. Our local officials must have the political will to implement a lawful order anyway as the local government has been upheld in issuing the said demolition order by the local courts and that must be implemented.

Our city officials must be firm once and for all. There will come the officials will no longer be obeyed and respected by the people because of lack of political will to enforce the law. They must show grit in their decisions to dismantle the structures in the area after the committed date of voluntary demolition. Let us not allow too much politics to be involved in this case.

We wish these leaders stop thinking of elections. The welfare of their constituency, including the youth who should benefit from this property must be prime in their consideration.Remember, these students are voters too. We need even a few individuals who can firmly decide independently of their political ambitions. The Cordillera youth call on you officials to grant them their due.