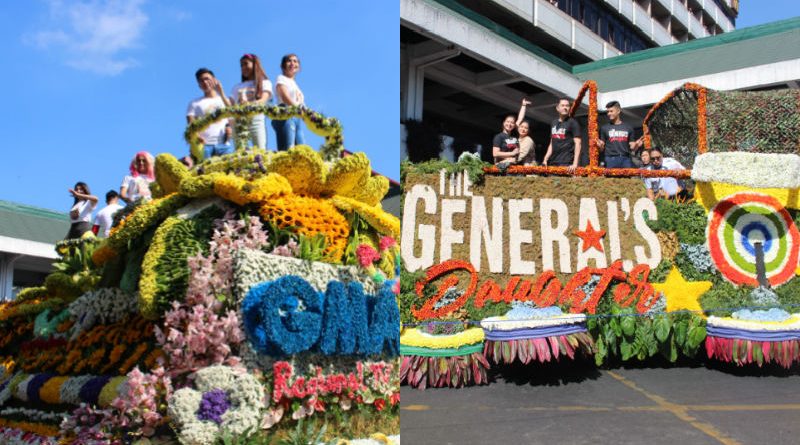 BAGUIO CITY  – Tens of thousands of residents and visitors alike eagerly awaited along the -kilometer road on what will be the latest offering of the 28 floats that were entered into the grand float parade Sunday morning and almost all of them were wowed by the significant improvements on how the participating floats for this year were presented.

Even the sibling rivalry between the two giant networks spilled over to the grand float parade as the floats of both networks were the ones that received thunderous cheers from the audience who were positioned in strategic areas along the parade route as early as 4 o’clock in the morning just for them to have a better vantage point of the floats.

Both Kapamilya and Kapuso starts featured in a number of primetime shows of the competing television networks spiced up the grand float parade that lasted for more than 3 hours.  This year’s ABS-CBN float featured one of today’s most talked about primetime programs, THE GENERAL’S DAUGHTER. One with the TV series’ concept, the float showcased a military-inspired theme that emboded the value of courage and encompassed love for the nation and of family. ABS-CBN logo and colors surrounded the float as the network’s signal of its strong support and cooperation with the festival and the government’s tourism, unity and economic thrusts. Camouflage dominates the color-scheme of the float and was embellished with wide array of local and imported flowers such as Chrysanthemum (red, yellow, green and white) assorted mums, blue and white static , cabbage rose, red and white roses, white Dendron, white spider mums, white orchids and white and blue hydrangea. Assorted leaves and natural vegetation was also utilized to fully achieve the float’s concept and design such as Kamuning , Dapo, Rosal, Mimosa, Celom, Philodendron, moss among others Aboard the Kapamilya float and joining the Panagbenga celebration are THE GENERAL DAUGHTER’S lead stars Angel Locsin, Baguio-born Paulo Avelino, JC de Vera and Loisa Andalio rode the float and got the warm cheers from the huge crowd gathered along the parade route.

On the other hand, the GMA Network float measured 24 feet long, 10 feet wide and 12 feet high and was made up of a variety of landscape of plants and leaves, and is adorned with combinations of tropical flowers, roses, orchids, endemic green mosses and the famous Sunflower of Baguio City. As the Panagbenga Festival celebrates abundance and season of bloom, the Kapuso network brought everyone programs teeming with color and fervor. Kapusao starts Tom Rodriguez and Kylene Alcantara added the attraction to the float which got similar cheers from the crowd while being paraded along the established route from Upper Session road passing through Harrison Road and ending up at the Melvin Jones football ground.

Spectators brought out their state-of-the-art mobile phones and cameras to take the need shots of all the participating floats as they passed by their posts as they took advantage of the city’s warm weather in enjoying the varying presentations done by the participating companies and groups on their floats that were beautifully decorated from numerous local and imported flowers.

Anthony de Leon, co-chairperson of the Panagbenga Organizing Committee, described the floats to have leveled up which was also appreciated by the people that patiently waited along the parade route to witness the first up to the last float that will parade in front of them.

“We appreciate the efforts of our participants to the float parade for having done their best in improving the presentation of their flats annually. We congratulate everyone for a job well done because it was able to add up to the integrity of the Panagbenga as a must-see festival in the country today,” he added.

Aside from satisfying themselves with photos of the floats along the parade route, organizers provided the public with the whole afternoon of Sunday to have their pictures taken in front or beside the floats of their choice that added an impact on the presentation of the floats which were lined up on the city’s major football field.

Panagbenga has become the best festival in the country and has become a benchmark for excellence in the conduct of other festivals in the different parts of the archipelago.

Panagbenga all began when lawyer Damaso Bangaoet, Jr.. John Hay Poro Point Development Corporation (JPDC) Managing Director for Camp John Hay, presented to the Board of Directors of JPDC the idea of their spearheading the holding of a flower festival in the city.

The board then led by the Bases Conversion and Development Authority (BCDA) Chairman Victor A. Lim and JPDC president Rogelio L. Singsong approved the project immediately and it was also decided that the festival be held in February.

Annually, both giant television networks bring in their floats and the stars of their primetime programs to added up to the entertainment that is being provided by the floats to the thousands of residents and visitors wanting to witness what will be the new attractions from the participants.

Mayor Mauricio G. Domogan, who also chairs the Baguio Flower Festival Foundation, Inc. (BFFFI), expressed his gratitude to the good remarks that were brought to his attention by the foreign and domestic visitors that flocked to the city to witness one of the most orderly and most peaceful festivals which was attended by disciplined spectators.

By Dexter A. See
Banner photo by: Armando M. Bolislis

This post has already been read 160 times!LA TRINIDAD, Benguet –  Benguet Caretaker Congressman and Anti-Crime and Terrorism through Community