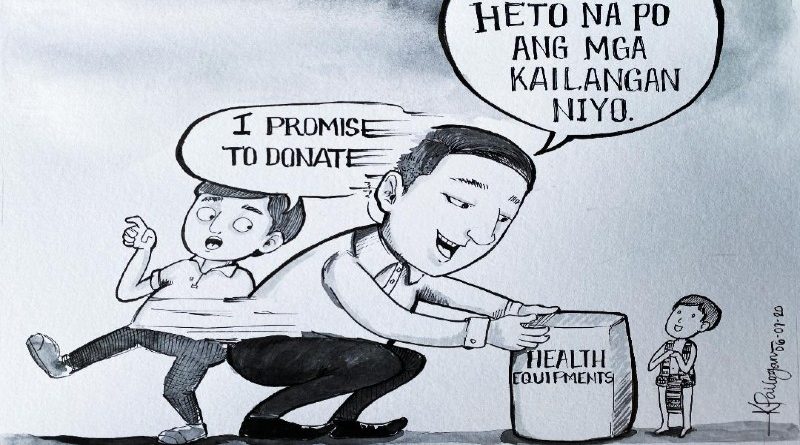 The national inter-agency task force for the management of emerging and re-emerging infectious diseases is pushing for the establishment of accredited sub-national testing laboratories in all provinces and cities nationwide to significantly improve the government’s testing capacity to ascertain the degree of infection inflicted by the dreaded Corona Virus Disease (COVID) 2019 to the population. It is for this reason that the health department is speeding up the accreditation of testing centers that have applied for issuance of license to independently conduct the reverse transcription polymerase chain reaction (RT-PCR) test to probable and suspected COVID patients and to fastrack the release of such results for the guidance of health authorities and local governments.

Aside from improving the testing capacity of potential sub-national testing centers, the government needs to intensify the isolation of probable and suspected COVID patients, trace their close contacts, test them, and subsequently subject them to treatment or quarantine to prevent them from infecting a bigger part of the population which might complicate things and cause a situation beyond the control of the health department and the local governments.

Earlier, the health department designated the Baguio General Hospital and Medical Center (BGHMC) as the only accredited sub-national testing laboratory in Northern Luzon but plagued by certain delays in the release of the swab test results of specimens that come from the Cordillera, Ilocos and Cagayan Valley regions, primarily because of the inadequate supply of consumables, the lack of sufficient manpower to do the round the clock tests, and the absence of the required automated extraction machine to prevent the manual handling of specimens.

During his recent visit to Baguio city, National Anti-COVID Action Plan Chief Implementer Secretary Carlito Galvez, Jr. imparted the need for local governments and the private sector to invest in the put up of molecular laboratories in their areas of jurisdiction to help the government improve the testing capacity of health facilities while the health department will provide the interested local governments with the needed technical assistance for the realization of the same within the next several months as the country is running out of time in ascertaining the portion of population that has been infected with the virus.

He promised to give to Baguio City two RT-PCR machines and an automated extraction machine for the city’s molecular laboratory in the City Health Services Office (CHSO). Simultaneously, Benguet caretaker congressman and ACT-CIS Party-list Rep. Eric Go Yap donated to the La Trinidad-based Benguet General Hospital (BeGH), a RT-PCR machine and automatic extraction machine. However, because of the absence of the required physical structure and the accreditation from the health department, the multi-million units of health equipment were loaned to the BGHMC for temporary use, giving priority to swab tests from Benguet. This loaned machine to BGHMC was able to speed up the release of test results. BGHMC is still awaiting the promised similar equipment at it continues to use the machine from the BeGH.

By August, BeGH’s molecular laboratory will be operational as Congressman Yap vowed to use his personal funds and private contractor to construct the required physical structure for the aforesaid testing center so that the facility could start the implementation of targeted testing in areas where there will be probable and suspected COVID patients.

Surely, there is a big possibility that Benguet will be the first local government in the Cordillera to put up its own molecular laboratory because of the sincerity and commitment of Congressman Yap to pursue the noble project to help in ensuring the immediate testing of he targeted sectors in the province. Aside from funding the put up of the molecular laboratory, equipping the same and improving the state of the hospital, the lawmaker is also trying to source out cheap test kits that can used to test the greater population of COVID-infected areas in the province to make the job easier for contact tracers. Congressman Yap’s actions is worthy of emulation as it is a testament of his will to serve and ensure the protection of the people of the province from the global pandemic that is wreaking havoc in the global village.

We believe now is the time for public servants to show concretely how they can serve their constituents away from publicity. We had been witness to what had been happening around us during the implementation of the Luzonwide enhanced community quarantine and can identify those leaders genuinely inclined to serve without strings attached, while there are others who take advantage of the situation to for self-aggrandizement and benefit.

Again, we go back to the age-old saying that actions speak louder than words. We salute people who are full of action but less in words. In these distressful times, we need more action to address the concerns of the majority of the population.

9     9SharesBAGUIO CITY   – More than seventy percent of the over 3,158 sitios in the franchise area of the Benguet Electric