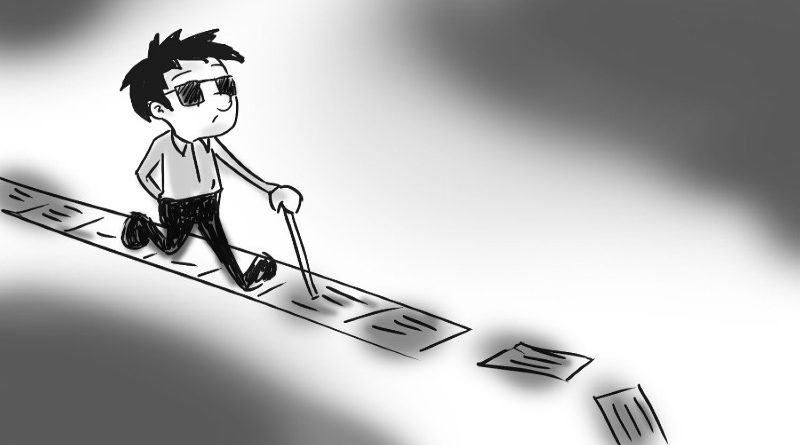 Tactile is a system of textured ground surface indicators found on footpaths, stairs and railway station platforms, to assist pedestrians who are vision impaired. Tactile warnings provide a distinctive surface pattern of truncated domes, cones or bars, detectable by a long cane or underfoot, which are used to alert the vision-impaired of approaching streets and hazardous surface or grade changes. There is disagreement between the design and user community as to whether installing the aid inside buildings may cause a tripping hazard.

A system of tactile paving was first instituted in Asia, starting at Okayama in Japan at pedestrian crossings and other hazardous road situations. Singapore followed suit, particularly in the Mass Rapid Transit (MRT), Light Rail Transit (LRT) and its sidewalks, and in South Korean, in city subways. Western countries such as Australia, United Kingdom and the United States subsequently picked up the standard at major cities in the early 1990s, and Canada started incorporating them into transportation first in the 1990s, before adding them to other aspects of the built environment in the early and late 2000s. Tactile paving was first developed by Seiichi Miyake in 1965 who was inspired by Braille. The paving was first introduced in a street in Okayama, Japan, in 1967. Its use gradually spread throughout Japan, Asia and then around the world.

Tactile paving is widely used in subway stations and sidewalks. Today, yellow tactile paving is ubiquitous in Japan. For aesthetic reasons, for example in front of hotels, the color of the paving might be non-standard, to match the color of the pavement or stone floor. Sometimes the paving contours are produced with steel stripes and dots. Tactile tiles spread rapidly after their adoption by Japan National Railways (later known as Japan Railway). In 1985, the system was formally named “Hazard Guide for the Vision Impaired.” Its modern form can be classified into two types: one has small, round bumps upon the surface of the block, which are felt through a sole, and the second is a directional aid, with long, slender bumps being installed on the surface.

However, many types have been manufactured and installed as an experiment. This has resulted in a situation which may be confusing for both the vision impaired and the elderly. Usually, the color of a tile is used to check the proper direction. If the color is not the usual one, there may be confusion. That has led to the standardization of the system throughout Japan.

In Baguio City, the city government recommended to the public works department the installation of tactile along major sidewalks in the different parts of the city as part of the walkability initiative of the city. This was pushed to be a part of the road improvement program supposedly for the benefit of the visually impaired.

Incidentally, during the continuous rains during the last four weeks, the issue of tactile arose. There is now a question on the acceptability of the tactile on sidewalks. The real experience of people on the tactile caused an uproar with some calling for their immediate removal to prevent the further occurrence of untoward incidents that will can threaten the safety of the individuals using the same.

On the part of the local government, city officials claimed that the tactile used in the project is of international standard and that there are proper ways to use these but they should not be stepped on.

We believe there were lapses on the part of the implementers, especially in instilling awareness among the public on the proper use of the tactile. The point that the putting in place of the tactile did not pass through a thorough study is partially correct that is why city officials should not be onion-skinned in dealing with the snowballing clamour even from the PWD sector for the removal of the tactile to avoid accidents.

We disagree to the contention that it should be the people that will adjust to the technology because no person will take the risk of being exposed to danger just to adopt to a certain technology. First things first, there should have been an aggressive information and education campaign to teach the people on the proper use of the tactile before installing the same on strategic areas in the city. We are not opposed to innovative and creative programs, projects and activities but the same should not be simply rammed on our throats just for us to blindly accept the same even if it will compromise life and limb.

This post has already been read 468 times!  Former Sen. Ferdinand ‘Bongbong’ Marcos, Jr. on Monday asked the government to