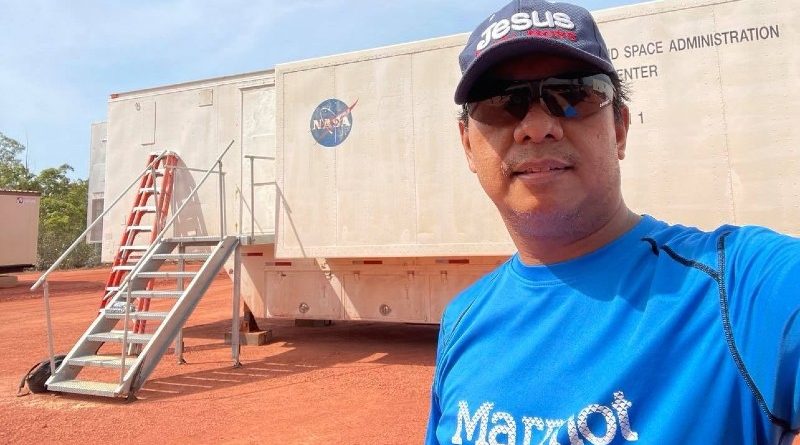 TABUK CITY, Kalinga  – In the middle of 2022, NASA will launch three two-stage Black Bant IX sounding rockets from the Arnhem Space Centre located in an area close to the equator in Australia.

The purpose of the missions is to conduct astrophysics research and provide scientists the opportunity to observe astronomical objects that cannot be observed from the Northern Hemisphere rocket ranges used by NASA.

This will be the space agency’s first ever lift-off from a commercial launching facility outside of the United States.

Part of the 27-strong NASA team involved in this historic event is engineer Czar Augustus E. Domingo, a Filipino born and raised in Tabuk.

Domingo is the team’s Lead Network Engineer/Data Communication Engineer leading the design and implementation of the launching site’s communication network.

“The network is one of the critical parts of this project since it is through which the NASA radar, Telemetry, LSTAR, range command center, launch command center, the communication equipment they use (intercoms), and the data communicate to each other,” Domingo said.

“The data they gather from the experimental equipment in the rockets are being transmitted and validated through the data communication,” he said.

Although he feels a bit pressured, Domingo said he feels blessed to be trusted with the job.

“Since this is the first NASA commercial sounding rocket launch site outside the US, I am blessed that my boss and NASA Goddard Wallops flight facility have the confidence in me to lead in getting the network and data communication established,” Domingo said.

“There is pressure, but it is just another motivation to work harder and produce the good results that my management is looking forward to accomplish. However, without God, this is nothing,” he said.

As a student of Tabuk National Highschool in the 80s and an engineering student at the Mapua Institute of Technology, Domingo dreamt of becoming an astronaut, but people had often mocked his ambition.

Though he is yet to become an astronaut, Domingo said working with the world’s top space agency to launch rockets into space is as close as it gets.

In his tenure at NASA, Domingo has worked in many rocket launches, most notable of which is the lift-off of the Northrop Grumman Antares rocket carrying a Cygnus resupply spacecraft to the International Space Station (ISS).

Carrying four tons of vital supplies for astronauts, the Antares rocket launches are the largest cargo ship ever to the ISS.

Domingo boasts a stellar career as an engineer. Before the opportunity to work with NASA, he had been with many multinational companies including Johnson & Johnson and telecom giant AT&T.

Domingo said he owes his success to God, to his family, and to his parents who taught him the importance of having a relationship with God in his life, education, honesty, patience, hard work and being humble.

“My faith in God has kept me grounded. My family gave me the strength to persevere, as they have been very supportive of my career,” Domingo said.

Domingo was born to Cipriano V. Domingo and Purificacion Andaya Estrañero who was the former principal of Tabuk National Highschool. Incidentally, Domingo and Mayor Darwin Estrañero are first cousins. By Iryll Sicnao

8       8SharesThis post has already been read 2785 times!The city identified some twelve priority investment areas that are expected to contribute in efforts