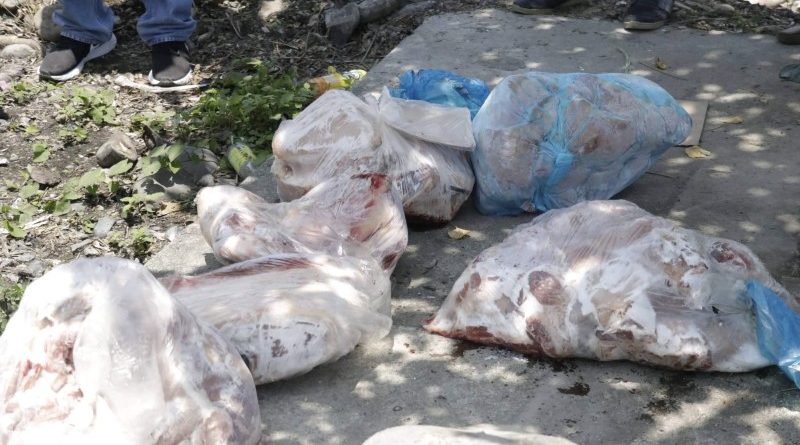 Around 87 kilos of imported pork were confiscated and disposed recently as a result of a regular meat inspection and monitoring activity of the City’s Local Price Control Council (LPCC).

Dr. Clemencia Cagan,  the City Veterinary Services Office (CVSO) who led the team, said that assorted kilos of pork products were seized from four vendors at the Dagupan Public Market after they failed to present the necessary documents as these products allegedly came from foreign sources.

He appealed to vendors to properly check the papers of meat products they are acquiring for re-sell to ensure all required documents are in place.

The LPCC has to ensure that the meat sold in the local market is safe and has met qualification standards fit for human consumption, Kub-ao stated.

The confiscated products were turned over to the meat inspector’s custody for proper disposal.

Members of the LPCC assured the public of the regular monitoring of meat products brought to the locality, and the strict examination of the entry of undocumented meat and meat by-products. This is a precautionary measure against the spread of African Swine Fever in the province.

Regular monitoring is also being done in coordination with the Consumernet members spearheaded by the Department of Trade and Industry and other line agencies.

As recalled, Sec. 31 (Absence of ante-mortem inspection) of Republic Act No. 9296, otherwise known as the  Meat Inspection Code of the Philippines,  states that “The inspectors shall seize, confiscate, condemn or dispose of carcasses or parts thereof of food animals that is sold, transported, distributed, offered or received for distribution in commerce that has not passed through ante-mortem inspection. Carcasses or parts thereof are considered “hot meat” and if found to be unfit for human use during examination shall be disposed of as provided in the implementing rules and regulations of this act”.

Under Sec.10 (Regulation by Local Government Units) of the Department of Agriculture Administrative Order No. 28 series of 2005, it states that “The local government units, pursuant to the provisions of Republic Act 7160 otherwise known as the Local Government Code and Executive Order No. 137, shall regulate the construction, management and operation of slaughterhouses, meat inspection, meat transport and post-abattoir control, monitor and evaluate and collect fees and charges in accordance with the national policies, procedures, guidelines, rules and regulations and quality and safety standards.

Sec.11. (Implementation by the local government units) of same administrative order says “The local government units shall have full and complete authority over the activities mentioned in the immediately preceding section as well as the authority to evaluate and implement duly prescribed national meat standards within their respective territorial jurisdiction”.  By Darwin Serion