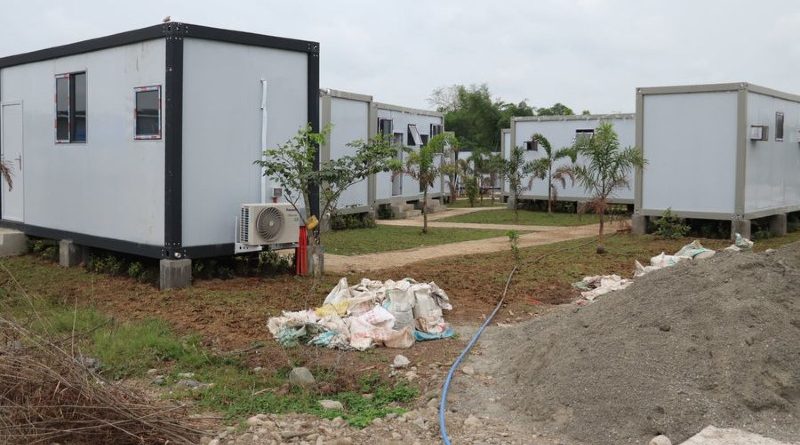 The city chief executive, together with the Department of Health-Cordillera (DOH-CAR) and City Health Officer Dr. Henrietta Bagayao, led the ocular inspection of the facility on Monday, April 5, as part of the certification process.

The first phase of the facility composed of 18 prefabricated smart house type units will add another 28 beds to the existing 30-bed capacity Agbannawag-Temporary Treatment and Monitoring Facility (TTMF). Each unit has 2 rooms to accommodate 1 patient per room but four (4) units were set aside as quarters and offices for the medical staff managing the facility. Each isolation room will be furnished with a bed, air conditioner, television, and a personal toilet and shower room.

Mayor Estrañero said the new facility was targeted to open in February but there were the transportation of the materials which shipped from China was delayed. “The target date was not attained but just the same, we were assured by the contractor that the first phase will be operational any time this coming week after we have completed the furnishings, like the beddings and such,” he said.

The mayor said he expects the phase II and phase III of the project to be completed within this month to decongest the existing isolation facilities amidst the surge again in COVID-19 cases in Tabuk. The project consists of 50 prefabricated units in total.

Standing a few meters from the isolation facility is the city’s very own COVID-19 RTPCR testing lab which can run up to 90 tests a day. Once it is operational, waiting time for test results will be shortened to within 24 hours instead of three days. The facility is likewise currently undergoing assessment by government regulatory bodies.

The construction of the new isolation facility is worth Php 25-million and funded from the Bayanihan Grant to Cities and Municipalities (BGCM) released last year to boost the COVID-19 response of local government units.  By Iryll Sicnao