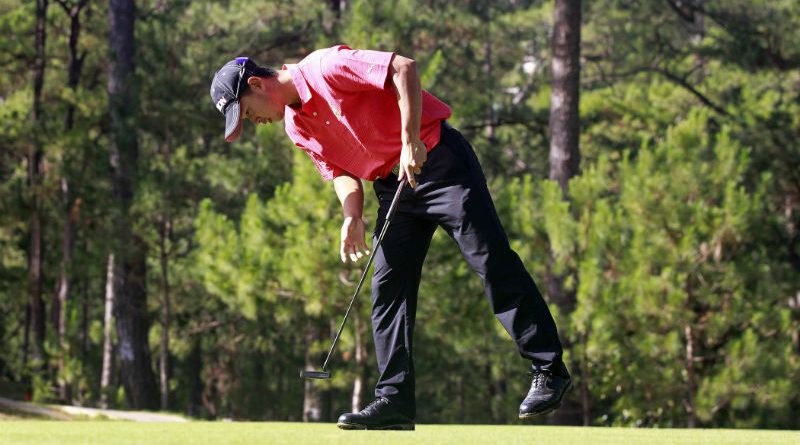 BAGUIO CITY – Manila Southwoods formally clinched the titles in the Fil-Am Invitational Golf Tournament anew in record fashion setting a 56 point victory in the Fil Championship and 57 in the Am Championship today, December 15.

The Carmona, Cavite parbusters burned the courses of the Camp John Hay and Baguio Country Club golf courses after shooting a closing round of 147 for a 562 four day aggregate in the former for the Fil Championship team and 109 for 505 points for the young Am team.

Yuto Katsuragawa burned the brightest with a league best four under 65 for 40 points to lead the Fil team. The 20 year old Nihon University student highlighted the day with a 13 foot putt eagle at the par 5 16th hole, hjis second in the tournament and at the same course.

Katsuragawa also had three birdies, on holes 1, 2 and eighth. The only blemish was the bogey at the 13th. His 140 total is also the best individual score, his second in three years. He missed last year’s Fil-Am.

Aguri Iwasaki submitted the other sub par performance with two under 67 for 38, while Aidric Chan shot a one over 70 for 35 and Carl Corpuz made a two over 71 for 34.

Left to defend the second place, Royal Northwoods got a three under 66 from Luigi Paolo Wong for 39 points despite a bogey-bogey finish. The 18 year old from nearby La Trinidad, Benguet actually got out of the roughs to salvage a bogey in the final hole, including a driver putt that drew applause from his teammates awaiting the last flight.

With a one under 68 for 37 from Nik Gatmaytan and the 29 and 28 of Carlo Villaroman and Raymund Sangil, Northwoods finished with 133 and 506 total to safely get the second podium.

Forest Hills got a pair of 34 from Dan Cruz and Rocky Co, 33 from Jude Eustaquio and 28 from Rupert Zaragosa for 129 and 498 total to secure third place.

Over at the BCC course, the Am squad of mostly teeners closed out with a not so impressive 109 but still outshot Batangas Barakos, which made 103 as they finish with 505 and a 57 point victory over the latter.

Rodel Mangalubnan had the flight best of 33 points to power Forest Hills Nicklaus to a flight best 113 and 444 to salvage third place overtaking Philippine Navy which had a closing round of 105 and 437.

Southwoods captain Thirdy Escano could only express his satisfaction over the performance of his teams. “They did not fail me,” said the E. Sparta player who holed out an hour after the last Southwoods man or boy teed out.

Escano said that the Am squad really fared well and some of them may fill the spaces to be left by Chan and Corpuz who will be enrolling at the Arizona University, while Corpuz is expected to be at the San Jose State University.

“Lanz is definitely moving up to the Fil championship but for the rest, we still have to look at the whole year performance of the players because that will be the basis for categorizing the players,” Escano said.

Escano actually predicted a 144 or 145 for the Fil Championship team, the strongest they ever had, and got 149 and 147 instead on the last two days.

“We are happy with the double win, it does not matter if it is a big or small margin, the important thing is we won,” said Southwoods golf manager Jerome Delariarte, who was part of Southwoods six-peat winning team from 1997 to 2002.

“It will also give them a big confidence, that is the young ones played and won,” added Delariarte, the youngest Southwoods member in 1999 that included Junjun Plana.

Team Surigao I closed with 109 for 432 and a 19 points victory in Fil-A. Che’Lus managed to escape a surging Mizuno Power Systems and won by a single marker after shooting 107 and 413 against the 116 of the latter for 412.

Forest Hills Palmer cruised to the Am B crown after shooting 109 and 428 points for a 25 point victory over San Miguel Corporation which shot 101 and 413.

Team Surigao got its third title in Am C when it outshot overnight leader Mizuno Power Systems in the last round 82-67 for a 346 total and a six shot victory. But Mizuno actually fell to third place when Royal Northwoods closed with a 70 for 340 total. Northwoods will take the higher place since the last man, Bernard Joson outshot Lovell Gopez 16-12.

Waterlympics Clark denied Team Surigao a fourth crown after a fourth round 84 and 332 total, a two shot victory on the latter. Macquarie Links Sydney took third place with an 84 and 328 total.

Square Compass of Nueva Ecija cruised to the Am D crown despite shooting only 64 points and 338 total. Moto edged NBI Golf Team 157 for second place after outshooting the latter 79-76 in the final round.

Uragun Golf B also denied Team Surigao another crown after closing with 87 for 324 and a two shot win over the latter which closed with 78. Fil Golfers of New York is at third with 305 after 79.

Batch 92 is the other team that stopped Team Surigao by outperforming the latter in the last round 66-62 to win by three despite a two point penalty. Batch 92 accumulated 262 points against the 259 of Surigao.

PhilCan Toronto salvaged third place despite submitting 49 points only for 234 and edge Macquarie Links Sydney by two. The Aussies had a closing round of 54.