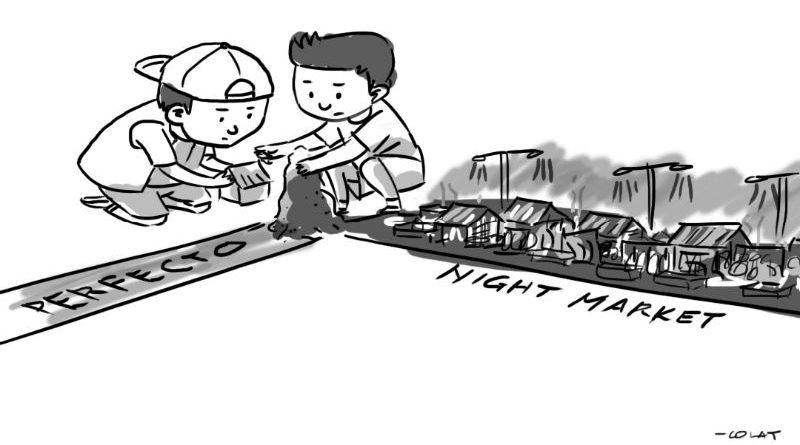 The regular night market along a 500-meter stretch of a portion of Harrison Road has become a regular attraction among residents and visitors alike. The nightly activity started over a decade ago with its original venue in the concreted portion of the Baguio Athletic Bowl with a few hundreds of vendors joining the nightly activity.

The night market underwent a series of innovations over the past several years until it achieved its unique identity to date. Visitors coming to the city make it a point to visit and shop around the night market to buy cheap and quality items. The night market is a must-see for visitors to the country’s Summer Capital and one has not visited Baguio without having bought products at the night market.

From the previous topsy-survey arrangements, the Baguio City Market Authority (BCMA) painstakingly instituted reforms, particularly the zoning of goods, and laid down the pertinent rules and regulations both for the vendors and the members of the Public Safety and Order Division (POSD). These contributed greatly to putting order and systems that drastically improved the situation in the night market. In the past, there were numerous complaints of alleged conflicts between vendors and the enforcers and vice versa, the illegal leasing of spaces by enterprising vendors, petty crimes, among others, that made it hard for concerned authorities to put things in proper order.

Today, we have to admit that the number of vendors wanting to do business in the night market continues to increase daily. From few vendors at the Baguio Athletic Bowl, their number grew to over 1,000 and still continues to increase. Hundreds who could not be accommodated by market authorities are classified as walk in vendors. With a mere P50 space rental every night for every vendor, one can earn a decent income from the night market, amidst the cold weather and sometimes harsh conditions like rains and winds, and the usual few hours of sleep that may affect their health. Nevertheless, the desire to earn through legal means is the primordial interest instead of illegally vending along sidewalks and prohibited areas in the market that are also hazardous to their health and safety, apart from the possibility of being fined for violation of the city’s anti-peddling policy.

No less than our city officials admitted that the night market has achieved its peak in terms of attracting vendors to participate and enticing the public, both residents and visitors, to patronize it from 9 p.m. up to the wee hours of the following day. Aside from being a major tourist attraction and economic driver for the city, the night market provides legitimate sources of livelihood to thousands of individuals from the different barangays and guarantees the local government added income of P1.5 million monthly with the least investment in terms of infrastructure, among others.

We commend the authorities who are behind the success of the night market because they were able to demonstrate their political will in ridding the city’s major roads, parks and sidewalks from ambulant vendors and transformed the illegal peddlers to legitimate night market vendors. The earlier conflicts between the vendors and the POSD enforcers and putting one over the other in order to gain among the vendors are simply part of the growing-up pains. The stories of intrigues against each other has also become a frequent matter discussed by the BCMA members that is why they have mastered the art of ascertaining who among them are actually lying.

The latest BCDM decision to extend the night market area along Perfecto Street is another welcome development because the hundreds of walk in vendors who are not accommodated at the present night market will have the chance to have vending spaces. We disagree to the contention of some of the vendors at the night market that the approval of the extension area will translate to their lowered income. The regular night market vendors should remember that they were able to establish clients through the years while the newcomers have yet to prove their worth in selling quality dry goods, thus, the BDMA was right in approving the extension of the night market so that residents and visitors will have a wider spectrum to select their purchases.

We however urge the BCMA and the local government to pursue the permanent relocation site of the night market area, particularly within the perimeter of the Melvin Jones grandstand, to free Harrison road from traffic congestions at night considering that the nightly activity in the area, being a national road, is simply being tolerated by the Department of Public Works and Highways.