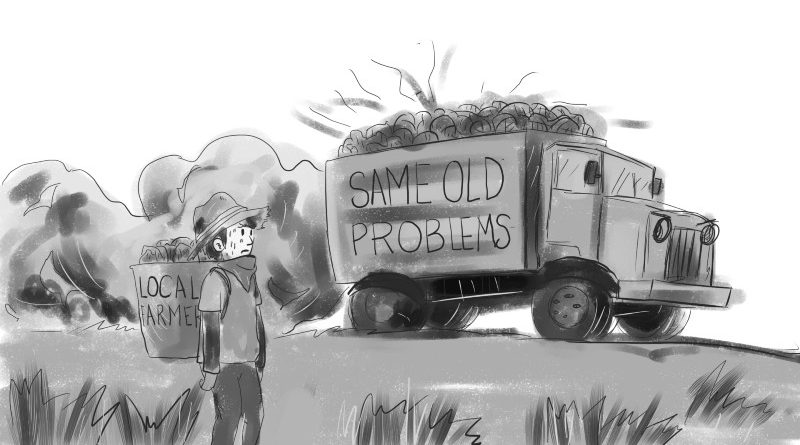 Benguet, some parts of Mountain Province and Ifugao had been the source of more than eight percent of the highland vegetables that are being sold in the different markets around the country. The province’s lucrative vegetable industry had been the source of livelihood for hundreds of thousands from the various vegetable-producing communities for several decades now. Further, thousands were able to become professionals because of vegetable farming which had been the way of life in most of the highland communities.

In many instances in the past, there were challenging times for the vegetable industry such as the green gold controversy in the early 1990s, and the influx of competing imported vegetables in the early 2000 that nearly resulted to the outright death of the industry. Aside from the aforesaid challenges, the World Trade Organization-General Agreement on Tariff and Trade (WTO-GATT) also exposed the vegetable industry to extreme challenges, especially in liberalising the industry, that could have resulted to the eventual extinction of vegetable farming.
However, the resilience of the farmers, coupled with the aggressive advocacy of former and present provincial and municipal officials, allowed the vegetable industry to recover from these problems and these vicarious experiences that made the farmers and the industry further grow. However, one negative impact of the development of the industry as a major livelihood sources is the serious threat it poses to the overall state of the environment in the vegetable-producing communities in the Cordillera. Admittedly, the expansion of commercial vegetable farms into portions of forest and watersheds is has had, and is now, a serious threat to the state of the environment because the establishment of vegetable farms means widening the plantation areas that inevitably means clearing the forests. The regular occurrence of natural and man-made calamities in vegetable-producing areas could be attributed to rampant deforestation. This is a matter that should long been addressed at the development planning stages of both national and local governments. With the situation now, these should be effectively and efficiently addressed by concerned government agencies and local governments hosting the said plantation areas.

With is Corona Virus Disease (COVID) 2019 pandemic, all businesses have been impacted in different degrees. Vegetable farming was not among those affected in terms of production but it in distribution. The volume of purchases from food establishments that rely on the province’s vegetable produce for their daily operations drastically went down. Because of the perceived over supply of vegetables caused by this significant reduction on the volume of purchases from food establishments, the provincial government was compelled to remedy the situation by clustering of the marketing of vegetables through the different trading centers in La Trinidad to make sure there is a stable volume of vegetable supply but at the same time, the buying prices does not vary much so that farmers can earn a decent income even during the community quarantine period. Under the clustering program, farmers from the municipalities in Benguet and other neighboring provinces are given the schedules when to deliver their produce to the different vegetable trading centers in La Trinidad as a measure to regulate the volume of vegetables that will not cause oversupply that will depress prices, and lead to losses. Many farmers appreciated the political will of provincial and municipal officials in the strict implementation of the clustering of the entry of vegetables because can be assured of reasonable income that will allow their families to go through the prevailing crisis situation up to the next harvest season.

The successful implementation of the clustering scheme prompted some local legislators, such as the likes of boardmember Nestor Fongwan, Jr., to work out the institutionalization of the said program to jumpstart the needed reforms to improve the state of the local vegetable industry. This will be the initial wave of programs to be introduced to vegetable farmers to sustain the industry by being familiar with the situation and making them at par with their counterparts in other countries in the global village.

We strongly believe one of the concrete programs that can help sustain the lucrative vegetable production is the realistic practice of crop programming to regulate production to balance the supply with the demand of the different types of highland vegetables. The successful implementation of the clustering scheme cannot stand alone, thus, it must be complimented by the practice of crop programming among our farmers to empower them to work and innovate with systems that can provide for the scheduling in the production of their crops, instead of them planting the same variety all at the same time which has not done good for the agriculture industry stakeholders. We certainly believe the farmer’s have learned their lessons the hard way, especially during the community quarantine, that is why it is high time for the concerned government agencies to aggressively promote the appropriate programs geared towards uplifting the status of the industry

Let us not allow the same problems of individualism to ruin the gains of the community quarantine, especially in stabilizing the buying prices of the produce of our farmers. Let us learn to take another giant step forward to advance the status of the industry and pass on the lucrative vegetable industry to the upcoming generations with good practices for them to sustain their livelihood.

What matters now is the commitment of industry stakeholders to participate in crafting the guidelines which will define the cooperation among all of them that will do away with the individualism that previously dictated the dynamics of the industry. We believe that crop programming and appropriate distribution schemes, like this clustering, can impact positively on the sustainability of this major industry in the region.

5     5SharesLA TRINIDAD, Benguet– The municipal council approved on third reading a proposed ordinance establishing a support program for vegetable and