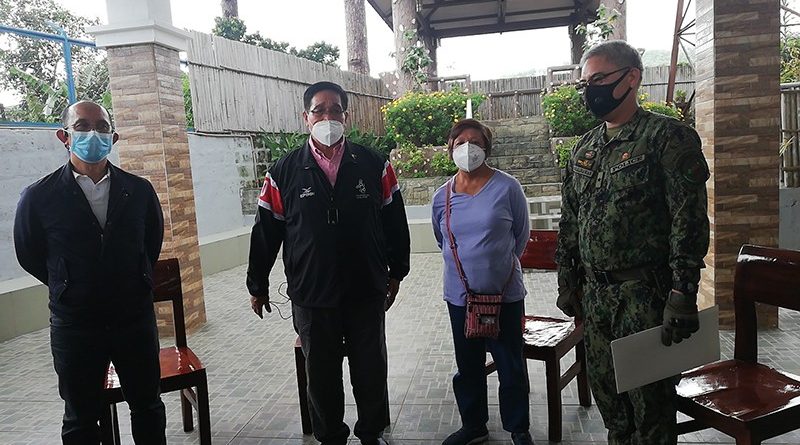 BAGUIO CITY July 02 – An alleged Communist Party of the Philippines (CPP) civilian sympathizer vowed to return to the people in her hometown in Besao, Mountain Province the financial assistance that she received from the government’s Enhanced Comprehensive Local Integration Program (ECLIP).

Speaking during the simple awarding of the ECLIP financial assistance to her, Anne Margaret Tauli, 69, a native of Besao, Mountain Province who had been accused as a CPP sympathizer, stated that since the financial assistance given to her by the government came from taxpayers’ money, she will return the amount to the people in the form of peace-related programs and projects that she will initiate in her hometown once she goes back and when the prevailing situation normalizes.

Earlier, Tauli decided to peacefully return to the folds of the law through the intervention of National Security Adviser Hermogenes Esperon, Jr. to clear her name on previous allegations of being an alleged CPP civilian sympathizer.

While living in her hometown, she had been reportedly the subject of a shoot-to-kill order and harassment from the military despite being an advocate of peace and development through her own little way, thus, she was forced to seek Esperon’s timely intervention for her to clear her name from being suspected as a ranking official of the CPP operating in the Ilocos and Cordillera regions.

Tauli received from the ECLIP some P50,000 as livelihood assistance and another P15,000 as immediate assistance in recognition of her peacefully returning to the folds of the law and embracing peace and development as one of her advocacies.

After being escorted to the city by ranking police and military officials from Besao town last June 11, 2020, Tauli underwent several weeks of consultative counseling and custodial debriefing by personnel of the National Security Adviser in Manila before being brought back to Baguio City for the awarding of the ECLIP financial assistance during simple rites held at the city hall multipurpose hall last Thursday as part of the Department of Interior and Local Government procedures for those “going back into the folds of the law”.

According to her, one of the advocacies she is doing is on the traditional sustainable pine forest management (batangan) which she helped work on with the elders, the villagers and the Besao Municipal Government to educate the youth and support government efforts, e.g. advocating for the passage of a resolution supporting the implementation of customary laws governing the batangan, for possible emulation in other areas to ensure the proper preservation and protection of the environment.

Under the ECLIP, Tauli is considered a rebel returnee although she simply peacefully returned to the folds of the law to clear her name from fabricated allegations of being a NPA officer and for allegedly coddling a CPP official who was killed in an alleged shootout in Baguio City last March.

Tauli narrated that she was able to start the implementation of several peace-related community projects in Besao before the implementation of the Luzonwide enhanced community quarantine (ECQ) and that her work in her hometown, her involvement in the church and cooperative, and other plans in helping in the municipality’s development were stalled by the wrath of the global pandemic.

The turnover of financial assistance to Tauli was witnessed by Mayor Benjamin B. Magalong, who is also the chairman of the Regional Peace and Order Council (RPOC), PRO-COR regional director Police Brig. Gen. R’win Pagkalinawan, Brig. Gen. Henry Doyaoen, commanding officer of the 503rd Infantry Brigade of the Philippine Army and DILG-CAR regional director Engr. Marlo Iringan. By HENT