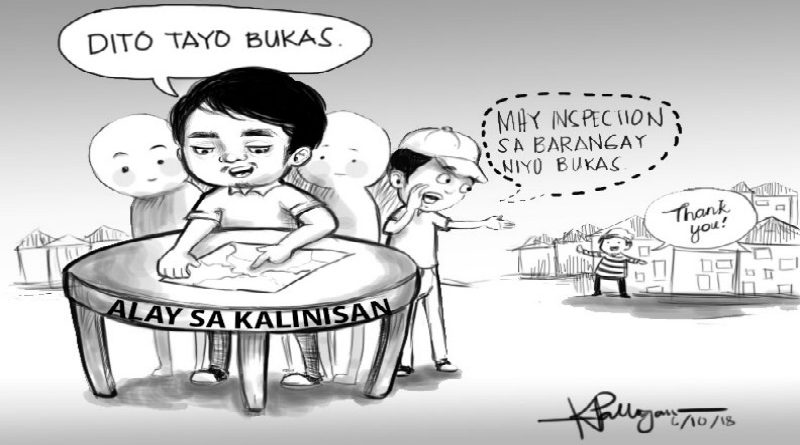 The Alay sa Kalinisan, a government-initiated and public sector-supported clean and green initiative in the country’s undisputed Summer Capital, was embraced by the local government to empower residents to be actively involved in the efforts of the city to maintain cleanliness and greenery around in the city. In 1995, the Alay sa Kalinisan was instrumental in the elevation of Baguio City to the Hall of Fame Award in the cleanest and greenest highly urbanized city in the whole country and the twice Gawad Pamana ng Lahi Award, the highest among all awards, which was given to no less than Mayor Mauricio G. Domogan.

The active participation of the private sector in the city’s clean and green campaign over the past several decades had been instrumental in maintaining the clean and green efforts of the local government to maintain the city’s state of the environment for the present and future generations to also enjoy the fruits of a good and balanced ecology.

However, the succeeding administrations discontinued the Alay sa Kalinisan for still unknown reasons leading to the deterioration of the city’s environment and the haphazard implementation of clean and green projects that defeated the purpose of enhancing the city’s ecology.

When Mayor Domogan was elected as the city’s local chief executive in the 2010 elections, the Alay sa Kalinisan was revived and had a good image over the past eight years due to the aggressive efforts of the private sector which continues to be the city’s active partner in improving the environment.

It is alarming to note, however, that the implementation of the programs, projects and activities under the Alay sa Kalinisan is being tainted with alleged irregularities raised by concerned citizens on how the monitoring and the judgement of winners are being done. While there are sincere and committed members of the monitoring and selection teams, it is alleged there are some members who do not play as members of the team but freely do what they want even if these are not in accordance to the rules and regulations.

The public is questioning on how a member of the inspection team who sleeps inside  vehicle could effectively and efficiently rate the programs of the barangays. Some barangay officials suspect that some members of the team warn their friends in the barangays of impending surprise visits. It is the team which is surprised at how ready some barangay are when they arrive at their target place to conduct the supposed surprise inspection. Some members of the team are also questioning some of their companions why punong barangays are being invited to an office where they discuss their programs with the untouchable ones only. These point to irregularities cast which doubts on the integrity of the results of the city’s clean and green contest.

We appreciate the initiative of the local government to inspect on a quarterly basis the barangays to instill awareness on the barangay officials and the residents the implementation of the programs and projects. This is part of the bases for evaluating which is the cleanest and greenest barangay in the city. However, this should be done round the clock instead of being done intermittently. We strongly condemn the patronage politics being employed by some members of the monitoring and inspection team in judging the clean and green programs of the barangays because that is already tantamount to graft and corruption.

The Duterte administration is working extra hard to curb corruption in the bureaucracy but there are some people in the government who seem not to be threatened by the government’s anti-corruption campaign with their acts.

The local chief executive must reorganize the members of the monitoring and inspection team and bring young and deserving individuals if the city is serious in improving the state of the city’s environment. While it is true that the current composition of the monitoring and inspection team are seasoned officers, it is high time fresh blood is infused to the team for the introduction of fresh ideas that will help in improving the criteria in judging clean and green programs of barangays.

We want the decades-old Alay sa Kalinisan to succeed with the infusion of young and idealistic leaders so that we can help our city move on to greater heights. We need to adapt and adopt new ideas and discard those not relevant in these times. The politics of Alay sa Kalinisan to keep our barangays communities ecologically sound, not for personal aggrandizement. The simple act of determining the cleanest and greenest barangays behooves that evaluators have the sincerest and cleanest conscience towards upholding environmental health. For these, the barangay constituencies, led by their officials, must make the live the clean and green motto as a way of life, not as a one-time, big time effort for awards only.