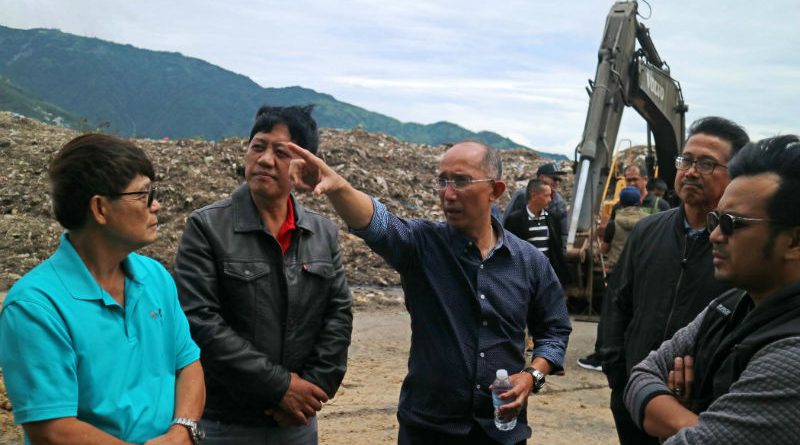 BAGUIO CITY – Newly-appointed City Administrator Engr. Bonifacio dela Peña assured the residents living below the Irisan controlled dump facility that the retaining wall was constructed by the local government to prevent the overflow of garbage from the closed facility is safe and the stability of the structure is guaranteed.

The new city administrator made the commitment to barangay officials of Asin and Irisan who brought to the attention of Mayor Benjamin B. Magalong the fear of residents living below the structure on the possible repeat of the 2012 deadly trash slide that claimed innocent lives below the dump facility.

“We were personally involved in the designing of the structure after the deadly trash slide in 2012 thus the safety and stability of the structure is guaranteed and there will no repeat of the said incident because of the planned conversion of the former open dumpsite to an eco-park,” dela Peña stressed.

He also assured that the local government will not add up to the existing stockpile of raw compost produced by the previous operation of the two environmental recycling system (ERS) machines as the same will be re-processed to compost fertilizer by the partner of the city, Rapport Innovations.

The trash slide that happened during the wrath of Typhoon Mina on August 27, 2012 led the filing of the Writ of Kalikasan against the city resulting to the eventual closure of the Irisan Dumpsite and the temporary hauling of the city’s residual waste to the engineered sanitary landfill to the lowlands.

Based on the inventory of the City General Services Office on the stockpiled raw compost, there are over 40,000 cubic meters of raw compost generated from the operation of the 2 ERS machines over the past 8 years.

Rapport Innovations engineers claimed that the 2 ERS machines purchased by the local government in 2011 are good units of equipment but they deteriorated over time and are undergoing repairs for their possible full blast operation by July 20, 2019.

Magalong claimed based on the assessment of scientists from the Department of Science and Technology (DOST) and Adamson University, there was something wrong in the operation of the ERS machines but those in charge of the same did not report the discovered defects to the local government for immediate correction of the said problem but instead, still put them in full operation causing their rapid deterioration over time.

The contractor took over the operation of the ERS machines last May 2019 after the local legislative body confirmed the memorandum of agreement for Rapport Innovations to operate the facility with almost no expense to the city.

The ERS machines were intended to convert the biodegradable waste to compost fertilizer as an income-generating project of the city government but this did actually materialize due to the unreported defects in their operations through the years.