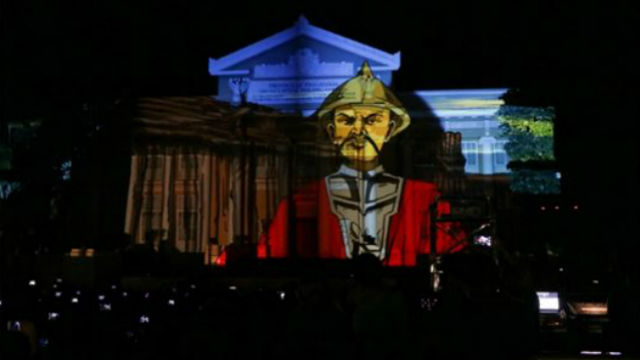 LINGAYEN, Pangasinan – Pangasinenses saw a unique showcase of the 438thAgew na Pangasinan (Pangasinan Founding Date) celebration via the staging of the Kidiyam PangAwaran (Sparkles of Pangasinan History) in the eve of April 5.

Elated with the overwhelming response of the Pangasinan day revelers over the Kidiyam PangAwaran, Governor Amado I. Espino, III, bared in an interview that the innovative way of presenting Pangasinan history stirs the attention of Pangasinenses, particularly the youth, to love their province by knowing their history and culture.

“With this sounds and lights show, and cultural dance presentations, we try to stir up people’s interest to embrace Pangasinan history and culture,” said Governor Espino, who gave the idea of adding more unusual glitters to Pangasinan day celebration, shifting from the traditional ways of commemorating the province’s founding anniversary, to heighten the sensitivities of Pangasinenses, especially the millennials, about local history and development.

Kidiyam PangAwaran, a feature of Pangasinan history in 3D projection which was complemented by the series of performances of Pangasinan talents and fireworks display held at the Capitol Plaza, gathered hundreds of Pangasinenses from various parts of the province who witnessed the said showcase.

The Pangasinan Capitol building was utilized as a “big projection screen” where significant periods of Pangasinan history and development were showcased via 3D projection with lights and sound complements capped by a 10-minute fireworks display.

An unusual feature of the Pangasinan Day celebration, the Kidiyam PangAwaran served as a prelude to the centennial anniversary of the Capitol building on December.

Provincial Tourism and Cultural Affairs Officer Malu Elduayan said the event is educational and entertaining by levelling up the awareness and sensitivities of Pangasinenses, particularly the young generation, on Pangasinan history and development.

Included in the almost two-hour lights and musical show were performances by the cultural and entertainment groups of the provincial government to include the Capitol Orchestra, Pangasinan Provincial Chorale, and the Danggoan Pangasinan Dance Troupe.

Giving the crowd a jolly atmosphere was the comedy skit by Insiong and Gusting.

Earlier, Governor Espino led the Agew na Pangasinan commemorative program, and the unveiling of the “Abong na Dayew” and the “Hall of Fame” exhibit.