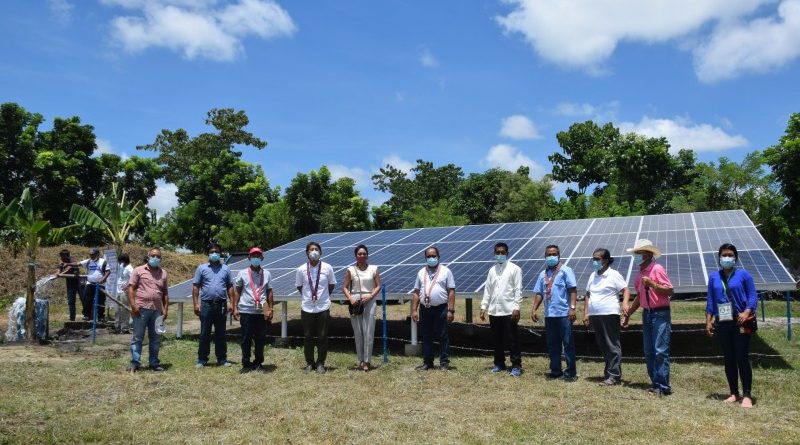 RIZAL, Kalinga – No electricity utilized. No diesel consumed. Yet the irrigation pump in this town is working, and irrigation water is flowing abundantly for an average of 9-10 hours a day.

This developed with the newly completed Romualdez Solar Pump irrigation project in Rizal, Kalinga which was turned over to Sitio Aba Irrigators’ Association for operation and maintenance in a simple ceremony on September 4, 2020.

“The project uses the power of the sun to move water, without the need for grid power or diesel, which can equate to P270,000 in annual savings at P75 per hour in electricity bills,” said Engr. Ronilio Cervantes, head of NIA-Kalinga Irrigation Management Office.

Engr. Cervantes shared that the project is powered by 30 solar panels and installed with a submersible pump of 7.5 horsepower lowered to a depth of 52 meters. With a nine to ten-hour operation in a day, the solar pump has a minimum discharge of 200,000 liters per day where more sun equates more water. Also, two units of reservoir tanks were constructed to store water from the solar pump.

Mr. Antonio Santiago, president of Sitio Aba Irrigators’ Association, said they can now cultivate their lands for rice and some high value crops for two croppings a year because of the Romualdez Solar Pump. The service area of six hectares which used to be rain fed were not tilled for some years due to lack of irrigation water. The project benefits 15 members.

“Solar pump projects for irrigation contribute in making lands productive and consequently helping feed the growing population of the Philippines. We hope for more projects like this in Kalinga,” said Hon. Allen Jesse Mangaoang, Representative of the Lone District of Kalinga and the guest of honor during the simple turnover ceremony.

Ms. Remedios Dilag, one of the staunch proponents of the project, expressed gratitude to the government thru the National Irrigation Administration and Hon. Allen Jesse Mangaoang, as well as Quinones Construction for the speedy completion of the project despite the pandemic. The project started in June 2020 and was completed in August.

Meanwhile, NIA-CAR Regional Manager Benito T. Espique, Jr. urged the Irrigators’ Association to strengthen their association with the assistance of NIA and hopes that the project will enhance livelihood in the area because aside from farming, the service area can have potential for fishpond, hog raising and high value crops.