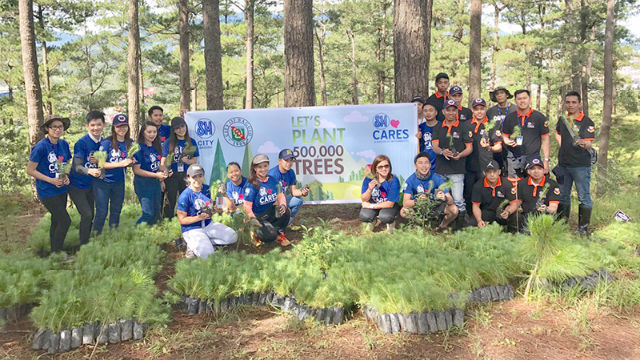 BAGUIO CITY  – SM City Baguio reaffirmed its overwhelming support to the efforts of the concerned government agencies and the local government by planting some fifty thousand assorted tree saplings in different plantation sites this year.

Last July 14, 2017, a day before the 30th founding anniversary of the Cordillera Administrative Region (CAR), some 250 SM City Baguio employees, together with representatives from the Community Environment and Natural Resources Office (CENRO), local government of Baguio, Baguio Regreening Movement (BRM) and the Baguio Water District (BWD) trooped to the Busol watershed to plant some 20,000 assorted saplings as part of the company’s commitment to bring back the greenery of the city’s environment.

The 20,000 assorted tree saplings that were planted were part of the 50,000 saplings that were committed to be planted by the company within the Busol watershed as Deyan Construction, SM City Baguio’s reforestation contractor, will be the one to plant the remaining balance of unplanted trees.

Aside from the 50,000 assorted tree saplings planted in Busol watershed, SM City Baguio’s contractor will be planting another 50,000 Benguet pine saplings in the perimeter of the 139-hectare property in Sto. Tomas School Area and Camp 7 for the remainder of the year.

SM Prime holdings committed to plant 1 million assorted tree saplings all over the country with 500,000 saplings to be planted within the watershed areas of Baguio city to help improve the greenery of the city’s environment.

After the tree planting activities of the company shall have been completed within the year, SM still has a balance of some 350,000 assorted tree saplings that will be panted in the different parts of the city, thus, its commitment to plant the half a million trees within five years could be shortened depending on the availability of the planting sites where the saplings will be planted and maintained by its contractor.

SM City Baguio assured stakeholders it remains committed in helping concerned government agencies and the local government sustain their environmental preservation and protection programs to be able to maintain the city’s forest cover instrumental in balancing its cool climate for the benefit of the present and future generations.