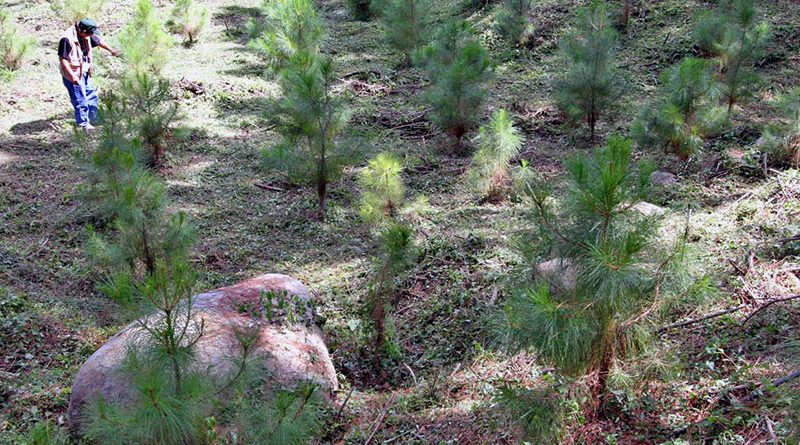 BAGUIO CITY – The management of SM City Baguio hired the services of a seasoned forestry contractor to maintain the plantation site within the city-owned 139-hectare property in barangays Camp 7 and Sto. Tomas Apugan to ensure the one-hundred percent  growth of the planted trees similar to their previous reforestation projects in the city.

SM management commissioned the services of Deyan Construction to initially monitor the growth of the over 30,000 aguho tree seedlings that were planted in the Camp 7 and Sto. Tomas Apugan areas and further plant the remaining 20,000 seedlings.

The giant chain of malls committed to plant a total of 500,000 tree seedlings spread over a 10-year period equivalent to 50,000 tree seedlings annually starting this year as part of its compensatory requirement after some 60 alnus and pine trees and saplings were affected by the implementation of its mall expansion project even if the Department of Environment and Natural Resources (DENR) required the management to plant 6,000 tree seedlings in lieu of the affected ones.

Deyan Construction’s contract with SM to maintain the over 25,000 tree seedlings that were planted in Busol watershed already expired, while its contract to maintain the PMA plantation area where there are over 30,000 planted seedlings will expire by December this year.

Under its contract with SM management, the forestry contractor is obliged to guarantee the 100 percent growth of the planted tree seedlings by replacing the ones that have died among other necessary interventions over a 3-year period.

Earlier, SM management revealed that the over 60,300 assorted tree seedlings and saplings it planted in various plantation sites in the city achieved a 100 percent survival rate because of the maintenance activities done by the hired contractor.

Some nearly 2,000 city and barangay officials and employees jointed the citywide mass tree planting activity in the city-owned property Friday purposely to plant the 20,000 tree seedlings provided by SM City Baguio as part of its contributions to the efforts of government agencies and the local government to bring back the greenery of denuded and barren mountain slopes in the different parts of the city.

SM management reiterated its commitment to be a steward of the environment by being aggressively involved in efforts to reforest certain areas of the city and to preserve and protect the remaining watersheds of the city which are major sources of potable water.

SM management believes that trees that serves as soil erosion control and sustain the availability of abundant water.