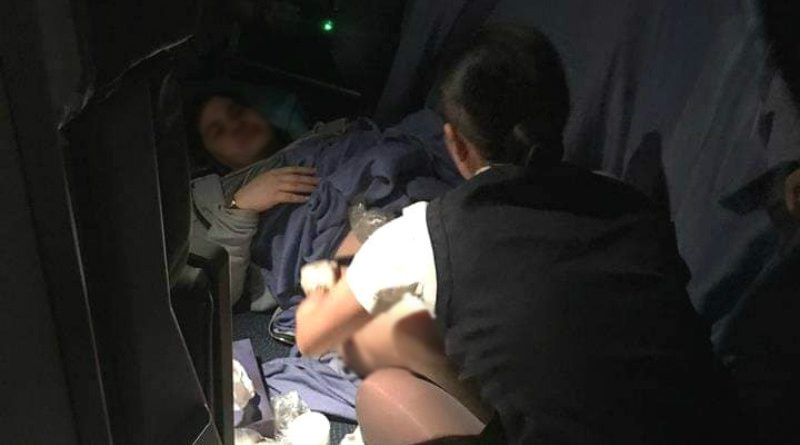 A Saint Louis University (SLU) nursing graduate, who is currently employed as flight attendant of the Philippine Airlines (PAL), was instrumental in the delivery of a baby while the plane was still in the skies travelling to the Philippines last January 26, 2019.

Marigold Parreño, also a registered nurse and part of the crew of PAL flight PR 683 travelling from Dammam, Saudi Arabia to Manila, led the delivery of a healthy baby girl from a passenger who went into labor while their flight was still some three to four hours away from the Philippines.

According to PAL, Parreño stepped up to assist the passenger throughout the labor, together with the other crew of the flight and another passenger who is also a licensed nurse.

At the request of the pilot crew, a medical team meet both mother and newborn upon landing and were brought to the San Juan de Dios Hospital where they were declared in good and stable condition.

Fellow PAL employee Paulo Infante was among those who first reported the incident through a Facebook post that went viral, generating over 8,000 reactions, 215 comments, and over 3,700 shares as of this writing.

Parreño described the incident as a beautiful scene of “Bayanihan” at its finest.

She thanked the thousands who sent her heartfelt messages and congratulations saying their messages inspired her and truly warmed her heart.

She acknowledged the help of the other PR683 crew: Danica Panganiban, Bryan Peralta, Apple Joanne Taguinin, Purser Guerick Mariano, among others, along with the other good Samaritan passengers on board stating she could not have done the act without them assisting her throughout the process.

She also expressed her gratitude of being a part of her PAL family, which trains its staff to become skilled safety providers onboard but also, proud of being a Filipino, having that indispensable culture to look out for one another on difficult situations such as this one.

Lastly, she also paid tribute to her alma mater and previous employer in the City of Pines, among others, with her #ProudLouisian, #ProudNotreNurse, #ProudPALCabinCrew, #ProudFilipino hashtags.

On the other hand, PAL saluted their PR 683 cabin crew and flight deck led by pilot-in-command Capt. Mark Philip Palomares in a post in its Facebook page, noting that they were flying heroes who didn’t wear capes and had to go beyond their call of duty to safely deliver the baby in the skies.

“Kudos to this testament of the true #HeartOfTheFilipino -showing buong-pusong alaga that knows no bounds!” ended the message.