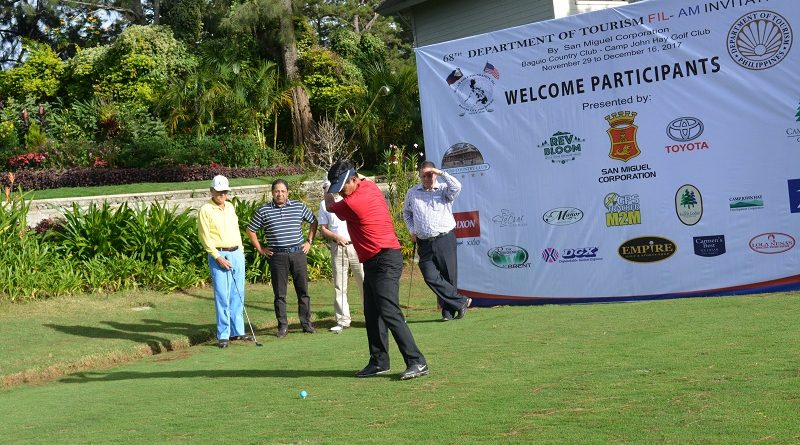 BAGUIO CITY – It’s all systems go for the 68th Fil-Am Department of Tourism Invitational Golf Tournament on December 2 at the Baguio Country Club and Camp John Hay golf courses where more than 600 players will tee off for the first week of competition.

“We’re on,” said both co-chair Anthony de Leon and Tim Allen after the ceremonial tee at both CJH and BCC courses attended by organizing committee members.

Actions begin in the Seniors division where presenter San Miguel Corporation will look for new strength with Eddie Bagtas opting to join his old club, Luisita’s in this year’s competition.

The Fil-Am golf will have 240 teams of which 68 teams will see action in the senior side or 55 years and older.

The senior Fil-Am, which was started in 2004 during its 55th year, will have flights for Championship, A, B, C and D for both the Fil and Am sides.

Allen said participation in the senior side has increased by 40 percent from when it started when
there were only three flights – Champ, A and B,” added Allen.

A Toyota Altis is also up for grabs in the event founded in 1949 by actor turned senator Rogelio dela Rosa and US Army Maj. Archie Black, then John Hay’s commander.

Roanne Garcia of the organizing committee said holes 18 and 10 from CJH and BCC, respectively, are the designated holes.

Meanwhile, the DoT is cashing in on the Fil-Am golf help boost tourism for the Philippines when it partnered with its organizers this year.

The bring home a friend program to boost tourism was launched last Octobder 15 until April 15 next year where tourists can win either a condominium unit at Magallanes, Makati, a brand new car and a P200,000 gift certificate from Duty Free Philippines.

With the Fil-Am golf as a major tourist drawer with its more than 1,200 players many of whom are foreigners, it could be yet of help to the DoT program, Allen said of CJH chairman John Sobrepeña’s plan of a golf tourism.

This year, the Fil-Am started at least a week late so that players from the US able to celebrate Thanksgiving Day before flying to Baguio and play.

“It has been a long clamor by Americans or Filipinos living in the US to have a later start so that they can celebrate Thanksgiving with their families,” said Allen, an American.

Thanks giving is celebrated in the US much more than Christmas, he said.

Games for the senior will be played until the seventh.

On December 8, practice rounds for the regular Fil-Am begin and the tournament proper to commence on Dec. 11 and will be played until the 16th.

By: DEXTER A. SEE