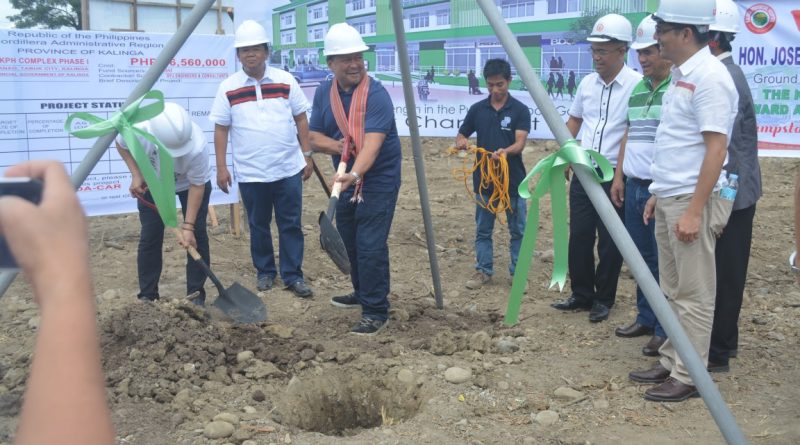 Governor Jocel Baac said that the Kalinga Children’s Ward and Medical Center will cost around P110 million and that the provincial government earmarked P36 million in 2017 and another P20 million in 2018 to start construction. Baac said he is banking on the support of Senator Ejercito and Representative Allen Jesse Mangaoang to raise the amount needed to see the project to completion. “Medyo narigat but with the help of the Congressman and Senator JV, makakaya natin,” he said. A memorandum of agreement was signed between the provincial government and contractor Dan Peckley during the opening of the celebration of Kalinga’s 23rd founding anniversary and the 2nd Bodong Festival on February 5.

“Be rest assured of my support to complete the project. You have my commitment,” Ejercito said during the ground-breaking ceremony on Thursday. “Ibabalik ko po ang suporta niyo noong 2013 [elections],” he added.

Ejercito chairs the Senate’s Committee on Health and Demography and vice-chairs the Committee on Finance. He led the rituals of the ground-breaking of Kalinga Children’s Ward and Wellness Center with Representative Allen Jesse Mangaoang, Governor Baac and other local leaders at the Provincial Action Center. He also received from Provincial Health Officer Dr. Romulo Gaerlan a folder containing the programs and proposals of the provincial government.

Mangaoang, for his part, also assured the public that he will help in sourcing out the P60 million needed for the project.

According to Baac, the Kalinga Children’s Ward and Wellness Center will rise at the site of the old provincial hospital which will be demolished. He said that it will be a three-storey building with commercial spaces on the first level, a 60-bed capacity children and maternity ward on the second level, and the Provincial Health Office on the third level.

Baac said that the Kalinga Children’s Ward and Wellness Center was started at the recommendation of the Provincial Health Committee which he chairs. He emphasized the need for a separate children’s ward in order to minimize the exposure of young patients to diseases. A separate children’s ward will also help address the problem of overcapacity in the wards of the KPH.

Senator Ejercito noted the shortage of hospital beds at the KPH, a problem that according him exists in almost all government hospitals across the Philippines. He said that the Department of Health (DOH) needs P228 billion to solve the problem of overcapacity in government hospitals and noted that the agency has a five-year plan to address it.

In light of the scare brought by the Dengvaxia controversy, Ejercito appealed to the public to continue getting vaccinations in order to avert the outbreak of diseases. “Sana po magpabakuna parin ang ating mga kababayan,” he said. He solicited the help of the local government of Kalinga in urging the public to continue undergoing vaccination programs of the government.

A known motorcycle enthusiast, Ejercito arrived in Kalinga late morning Thursday astride his Ducati. He was accompanied by friend Raymart Santiago and members of the rider group Adventure Team Phillipines (Isabela Chapter). This is the second time the senator has visited the province.