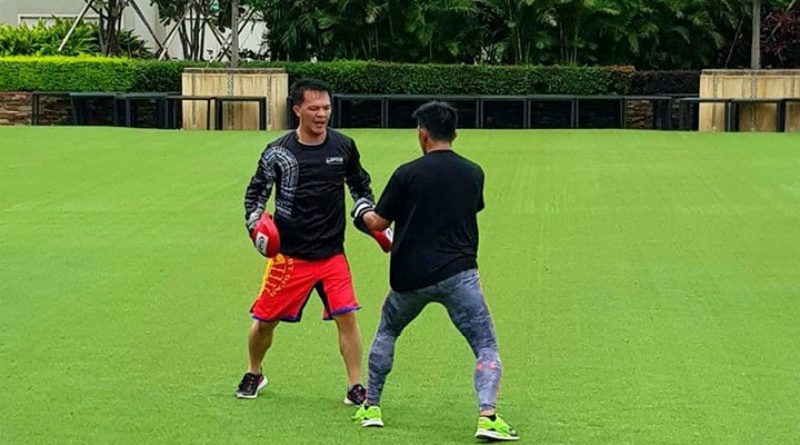 Team Lakay head coach and Philippine martial arts pioneer Mark “The Machine” Sangiao has his work cut out for him over the next few weeks because several of his star athletes are preparing for their respective returns to action, since the Covid-19 pandemic changed the world.

Two-time former ONE Lightweight World Champion Eduard “Landslide” Folayang, perhaps Sangiao’s most prized pupil, is up to bat first, and will see action next week against Australia’s Antonio “The Spartan” Caruso at ONE: INSIDE THE MATRIX, which broadcasts live from the Singapore Indoor Stadium in Singapore on Friday, 30 October.

Sangiao believes this is a very important fight for Folayang, and one he is determined to win in order to break the Top 5 in his division.

“For us at Team Lakay, every fight, no matter how minor or major it is, it’s very important. This fight in particular is very significant for Eduard, as the result will dictate if he can get back in the list of top lightweight contenders,” said Sangiao.”Right now, we’re working double time, focusing on our game plans and strategies, especially for Eduard.”

Team Lakay are already on their way to Singapore as of this writing, and will soon get acclimated to the ‘Singapore Bubble’ ONE Championship established with the Singapore Government to deal with Covid-19 complications.

“During the lockdowns here in Baguio City, we all trained in our respective homes. We only just returned to the gym two months ago, strictly adhering to Covid protocols. It was great for our athletes because they could spar with each other.”

In Caruso, Folayang faces a multiple-time Brazilian Jiu Jitsu champion, who has trained under the legendary Henri Hooft with a handful of top tier ONE athletes including ONE World Champions Aung La N Sang and Martin Nguyen.

Acknowledging the necessity of a resounding victory over Caruso, Sangiao says they’ve already crafted the right game plan to produce a solid win.

“We’ve studied Antonio Caruso’s previous fights and we’ve already come up with a good game plan, which will hopefully work in our favor,” said Sangiao.

After dropping three of his last four, however, Folayang is looking to prove he still has what it takes to compete among the best.

Many fans and experts say the end may be near for Folayang and that the veteran should contemplate retirement, especially if he loses against Caruso.

For Sangiao, the most important thing is where Folayang’s heart is. If Folayang is still dedicated to reaching his dreams and accomplishing his goals, if his heart is still in it, Sangiao believes “Landslide” can still do some damage in the division.

“Eduard is a very talented fighter, no doubt. He has all the skills and tools to succeed on the championship level. And he has a very difficult style to deal with. As long as I can see Eduard being passionate and working hard for his career, I believe he can still get to the highest places in MMA,” said Sangiao.

“I think the end is there for every fighter. No one can fight forever. It’s about listening to your body, and paying attention to your mindset. This fight will answer a lot of questions about Eduard, win or lose. But honestly, we’ve never even discussed his retirement. He still wants to achieve a lot of things in this sport.”

ONE: INSIDE THE MATRIX is a blockbuster featuring four World Title bouts for a total of six compelling martial arts contests.

5       5SharesThis post has already been read 4585 times!The city is looking for a private entity that is willing to partner