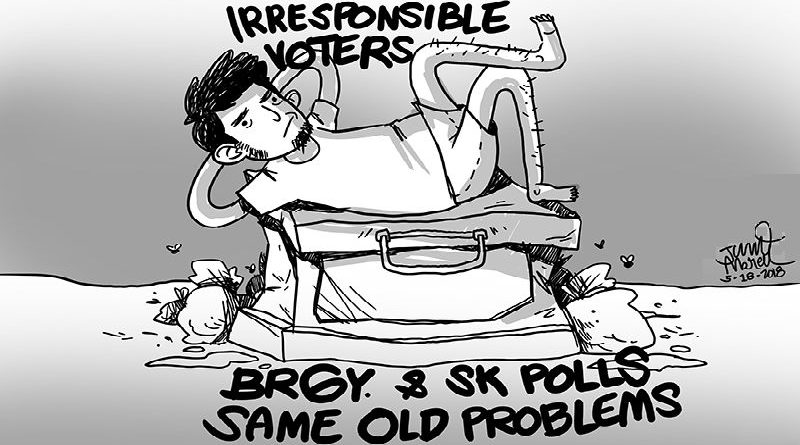 The mode of conducting the May 14, 2018 synchronized barangay and
Sangguniang Kabataan (SK) elections went back to the manual voting which
was the common practice prior to the implementation of the automated elections over the past three political exercises in the country. Millions of voters flocked to their polling precincts expectant to have easy access in casting their votes for their chosen candidates only to find out that the same old problems still exist and could have far been worst as of election day.

In the past, voters have to line up in the different precincts in their polling centers simply to look for their names taking much of their time which in the end showed their names were not in any list. We see a postings in social media of some of our friends who did not find their names in the different posted voter’s lists who simply moved out and failed to exercise their right to vote. On the other hand, some voters who were really interested to have their votes counted for their chosen candidates exerted extra effort in locating their names even to the extent of going to the nearest election office to revisit the master list of voters to locate where their names at which precinct.  This problem of missing names was also experienced during the past three automated elections even if the list of voters was already computerized complete, with the biometrics of the concerned voter.

With the rapid advancement on information and communications technology which has been embraced by the poll body to significantly reduce the problems commonly encountered by voters on election day, the same old problems appeared in this recent political exercise which casts doubts in the sincerity of election body to really put things in their proper order.

The Philippine Constitution provides the right of suffrage for Filipino citizens to vote and to be voted upon. Because of missing names for still unknown reasons, voters are being deprived to exercise their right to suffrage, a violation of the basic rights of citizens. Nevertheless, the problem could not be solely attributed to or blamed on the Commission on Elections (Comelec). Voters must be responsible to make sure that they actually know their polling precinct and polling center way ahead of the elections. While it is true that the list of voters was already computerized and the master list is always available to serve as ready reference, many voters still complain that their names appearing in their last polling precincts could no longer be located during the synchronized barangay and SK elections. This is one reason for the low turnout of voters in almost all parts of the region.

Election officials claim some of the reasons why the names of some voters are no longer in the master list or in the list of voters posted in the polling precincts and polling centers are alleged failure to cast the vote in two successive elections, transfer of where the voter intends to vote or the failure of the poll body to transfer to the place the name of the voter who already indicated the desire to transfer the place where he intends to cast his or her vote.

We agree that the Comelec has to do a complete overhaul of its present system in handling the list of voters because of the recurrence of the same old problems. Worst, even the names of deceased individuals are still in the list. Before the May 2019 mid-term elections, the poll body must massive clean its list of voters and formulate a system to correct the infirmities of the list to prevent similar long lines of voters looking for their names in the next political exercise.

We understand the predicament of some voters who get easily disappointed after discovering that their names are no longer in the list despite having cast their votes in the same polling precinct and polling center in the past election. It is important for the poll body to coordinate with the Philippine Statistics Authority (PSA) to rid the list of voters of the names of those who already dead and to make sure that all those who are in the list will not be disenfranchised and their right to suffrage denied.

We understand that it is also our responsibility to check our names in the list of voters made available to the public several days any election to give us time to remedy how to exercise our right to vote once we find our names missing in posted lists of voters. It takes both our responsibility as citizens and the government’s obligation to ensure that we exercise our right to vote to make electoral democracy work.