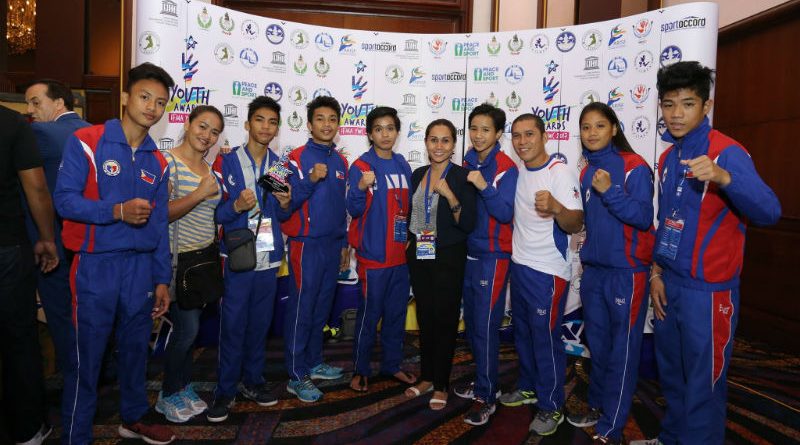 Liane Benito brought home a silver while Mariah Co took home a bronze to help the Philippine cause that resulted to a total haul of three silvers and two bronzes by the 8-man strong Philippine contingent in the International Federation of Muaythai Amateur (IFMA) Muaythai World Championships in Bangkok, Thailand last August 1-11, 2017.

Benito, a 15-year old native of Bayabas, Monglo, Sablan, Benguet, won her elimination and semifinals matches before yielding to an Australian in the finals in the 14-15, 45 kg category.

The grade 10 incoming student of Sablan National High School (SNHS) dumped Nadya Indah Royani of Indonesia then Melis Nazligan Talun of Turkey, both winning on points by a similar score of 30:27.

She, however, fell to Erin Harberger in finals on a 28:29 squeaker decision.

Co, a student of the Philippine Science High School and campaigning in the 12-13, 50 kg category easily won against her Bangladesh opponent on a 30:27 decision but succumbed to a close 28:29 loss on points decision against Ksenia Quimenaya of Russia in the semis to settle for the bronze.

On the other hand, Ghenyhan Berdon and Rudzma Abubakar collected a silver each while Kristian Narca took home a bronze to complete the Philippine haul.

Berdon, campaigning in the 14-15, 45 kg category, prevailed against Mamatkulov Ibrokhim of Uzbekistan and Hossein Abdi Barandagh of Iran on a similar 30:27 points decision to advance to the finals where he fell to Russia’s Nimita Chenov to the a 28:29 decision.

Abubakar won her first 16-17, 45 kg match against an Austrian boxer by a 30:27 and followed it up with a similar 30:27 win over Khochaporn Yuangyai of host Thailand.

She, however, yielded on a 27:30 points loss to Portugal’s Joana Alves.

Meanwhile, the other two Kurt Lubrica splits his matches while Rosemarie Recto failed to advance as she lost her only match, albeit in closely fought fashion.

Lubrica, studying at the Guisad Valley National High School, squeezed in a 29:28 decision over Hong Kong’s Chun Hei Chau in his first match but was waylaid by Kazakhstan’s Yerdana Yertoganov, 30-27, to end his campaign.

Recto dropped a heartbreaker 28-29 decision to Portugal’s Teresa Moreira in the 16-17, 48 kg category, a loss that put an end to her attempt to advance to the tournament.

Bryan Ray Siglos, the other member of the Philippine participants, fell to Hungary’s Szna Patrik by referee stoppage.

Local coach and Kafagway MMA founder Bryan Olod praised the efforts turned in by the Philippine Junior Team. “They have competed against the world’s best. They all have learned lots and lots of lessons!”, he said

He also pointed out the experience gained by those who did not succeed in bringing home a medal. “They will surely coming back stronger and more ferocious (in) the next competition”, he ended.

Olod acts as teacher/coach of Benito and Recto at the Sablan National High School .