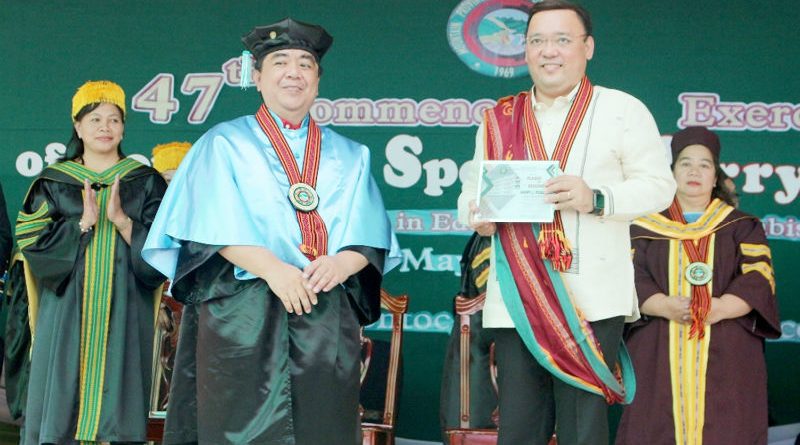 A top ranking official of Malacanang recently visited this school in the midst of the Cordillera mountains and reminded its graduates how important it is to preserve local history and culture.

“Preserving your heritage…is one great legacy you owe to the country,” thus said Presidential Spokesperson Harry L. Roque who was guest of honor and speaker during the 47th Commencement Exercises of the Mountain Province State Polytechnic College at the Provincial Plaza, Bontoc, Mountain Province on May 29, 2018.

Presidential Spokesperson Atty. Harry L. Roque, who arrived by chopper, congratulated the graduates for staying and finishing their degrees in the College. “You stayed here in the higher ground of the Philippines and sustained your love for this place…. You, the graduates of Mountain Province State Polytechnic College benefit from your ancestors’ stand and you are now enjoying the fruit of their struggles for having a place you are dearly connected with, a place of your own.”

He encouraged the graduates to preserve the heritage of the Filipino ethnic community and to sustain the natural environment. He even challenged every graduate to be an assertive mountaineer. “I challenged you to maintain and sustain this place to be a good source of knowledge on how to love the environment plus a lot more.”

He said to graduates that their higher education is considered to be their heritage. That even with the explosion and advancement of technology, he encouraged them to know how to use and handle their heritage and to preserve it. “Use technology to protect our environment and other forms of livelihood generating resources. Huwag lamang sa sobrang hugot lines at fake news sa social media.”

Roque also encouraged the graduates and the youth to find a job in the locality and to bear with them the value of ‘sipag and tiyaga.’ Having so, a developed Mountain Province will not be far-fetched.

Finally, the spokesperson asked the graduates to use their higher education as an instrument in promoting and maintaining their own culture.

Atty. Roque was met at the Eyeb Grounds by a committee composed of MPSPC Vice President Rogelio K. Balcita Jr. and BS HRMT Chair Dr. Karen B. Cue. He then was brought to the provincial plaza where the commencement exercises was taking place. There, he was met by College President Dr. Rexton F. Chakas who introduced him to the public. The presidential spokesperson stayed for the hooding ceremonies for the graduate students. He then proceeded to the College quadrangle where a crowd of students, College personnel, political leaders and other community elders were on hand to welcome him. He gamely danced with the Student Cultural Arts Group and other college personnel. He then proceeded to the College AVR for the press conference and briefing. He sportingly engaged in a boodle fight with the crowd during lunch and went back to Manila shortly afterwards.

For the College President, the visit and positive response of the Presidential Spokesperson to speak to the MPSPC community was an evidence he has time and heart for small state Colleges like MPSPC.