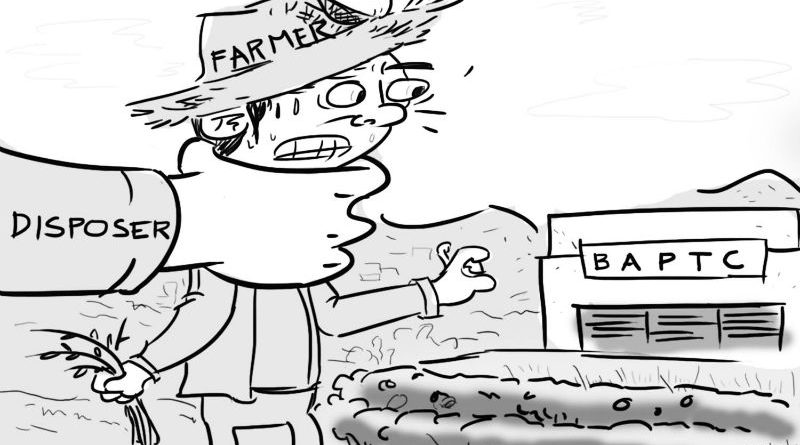 Benguet, along with some parts of Ifugao and Mountain Province, is the source of at least 82 percent of semi-temperate vegetables being sold in the different parts of the country. Some 300,000 individuals rely on vegetable production as their major source of livelihood over the past several decades. Vegetable farming is the most suitable source of livelihood for the people living in the highland communities. Locally produced vegetables have been described by most consumers in the lowlands as fresher, crispier and juicier compared to the well-packaged imported vegetables, mostly from China.

In the late 1980s, the La Trinidad municipal government obtained funding assistance from the United States Agency for International Development (USAID) for the put up of the vegetable trading post where farmers and traders are supposed to converge and transact business related to highland vegetables. Most of these vegetables are shipped to the lowland and Metro Manila markets. The vitality of transactions showed the potential for enormous profit along the whole chain from production to distribution. Several enterprising individuals were able to think of schemes by which they can control the whole chain or parts of it. The early form of controlling the market was through the harang system where traders intercepted vegetable transporters along the Halsema before they reached the market. This benefitted the traders in at least two ways: they can undercut the prices of vegetables by misinforming the transporters about the price, and they get the best of the lot. In situations like this, the gardener-transporters were in no position to negotiate because, then, there was neither a price information system nor assurance of having their produce sold at the trading post or elsewhere.

Several schemes developed thereafter mainly to finance production costs. Thus, we have “financiers” in the vegetable industry who come in many modalities among of which are the financing of all inputs from seeds to labor and extra cash to tide the farmer’s family over until the next harvest; financing only the commercial inputs; financing of labors, etc. All these entail different payments schemes but the bottom line is that the proceeds of the produce are shared with these financiers. By its very robust existence until now which is resorted to by most farmers every planting season, it seems that the vegetable farmers actually are not saving enough to meet productions costs the next planting season and to meet family needs until harvest time.

Now there is another player in the market, the disposer. This group of players may be financiers also. What is clear is that players facilitating the marketing of vegetables, especially to lowland markets, are very powerful and they gain more from market facilitation than the farmers. Such practice has been going on to the extent that disposers now hold the farmers on their neck and whatever they dictate on them are willfully realized to the disadvantage of the interventions being introduced by concerned government agencies to at least remove the crippling bond between the middleman and the farmers.

In order to facilitate direct marketing by farmers and minimize these middle traders, the government put up the P600 million Benguet AgriPinoy Trading Center (BAPTC) to increase farmers’ incomes through a more direct marketing scheme. Sadly, the multi-million facility has not yet been fully utilized because most of the farmers refuse to patronize the supposed services available in this facility because there is still the control of middle traders on some farmers.

We believe it is high time for the relevant government agencies and the local governments to get their acts together and compel farmers currently using the trading post to transfer to the new trading center and avail of the services that it will be providing them. There must be the political will to close the gap between the garden and the market so that the real producers will directly benefit from their sweat.

We call on the farmers to engage the BAPTC  independently by providing inputs to make the facility meet their needs. Seemingly, BAPTC is willing to take over the role of the financiers and disposers. Why are farmers not taking advantage of this?

On the other hand, has BAPTC really engaged the farmers from the start to build ownership of the concept and project? Is this another ivory tower project FOR the farmers? Is it really addressing the real need of farmers? Farmers are not risk takers because they are dependent on crops whose growth are subject to the vagaries of the weather. They do not want to take a risk in a facility that does not meet their felt needs. There are so many studies on why farmers feel more confident is relating with informal financiers even if it means lower profits. Have these been taken into consideration?

The question is, why should the farmers not embrace such a noble project if it is really meant for them?