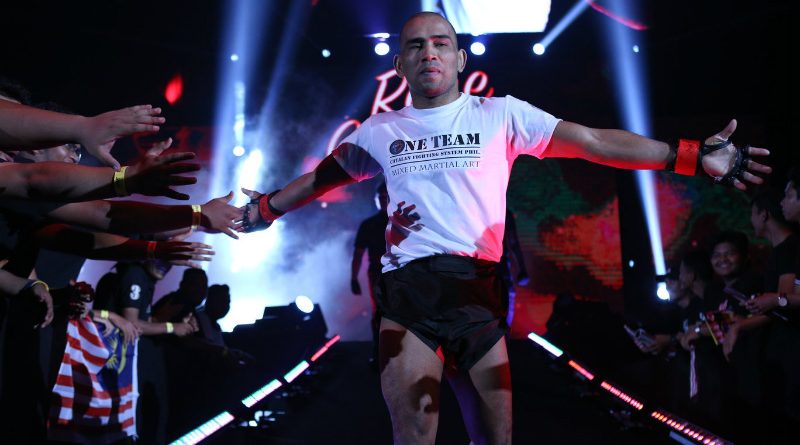 With 2018 bringing in a whole new set of good opportunities for local talents in the Philippines, homegrown Filipino combatant Rene “The Challenger” Catalan is looking to kick off the Philippine mixed martial arts scene’s promising new year with a sweet win as he dons the country’s colors on the undercard of ONE: KINGS OF COURAGE.

Catalan squares off with China’s Peng Xue Wen in a three-round strawweight affair at ONE: KINGS OF COURAGE, which takes place at the Jakarta Convention Center in Indonesia on 20 January.

A highly-decorated Wushu practitioner, Catalan seeks to continue his winning ways inside the ONE Championship cage after picking up two noteworthy victories in 2017.

Catalan started his 2017 on a high note by submitting Indonesian prospect Adrian Matheis via a second-round armbar in January before routing China’s Bu Huo You Ga by way of unanimous decision seven months later.

As the lone Filipino representative at ONE Championship’s first live event of 2018, Catalan seeks to tally the country’s first win in Asia’s premier martial arts organization this year.

“I am exerting a tremendous amount of effort in training. I want to keep on winning,” he said. “I am inspired to win my match this coming January 20 because I am representing the Philippines. It is always an honor to fight for my country. My goal in this bout is to win and bring pride to my nation.”

For Catalan, his first trip to the ONE Championship cage this 2018 is another step in his evolution as a martial artist, hoping to keep up his winning streak and inch him closer to a potential shot at the ONE Strawweight World Championship.

“My goal is to compete for the ONE Strawweight World Championship. I know before I get to that stage, I still have a lot of work ahead of me,” he stated.

Catalan had a rough beginning to his tenure in ONE Championship, but over the past year and a half, he has completely turned his career around.

Despite a tough promotional debut under the ONE Championship banner, which saw him lose to now-reigning ONE Strawweight World Champion Alex “Little Rock” Silva, Catalan has rallied back.

Catalan has strung together three consecutive victories since September 2016 and will look to break into the upper echelon of the division when he meets Peng at ONE: KINGS OF COURAGE.

“I have a certain game plan, but I am prepared to defend against his wrestling,” he shared.

Peng is a 2014 Chinese National Youth Grecco Champion who made his promotional debut at ONE: LEGENDS OF THE WORLD in Manila, Philippines last November.

The Chinese standout leaned on his impeccable grappling to overwhelm Cambodia’s Phat Soda before knocking him out with an awe-inspiring suplex halfway through the opening stanza.

Catalan is well aware of his opponent’s grappling expertise and is diligently training to refute his bread-and-butter as well as his explosive skillset.

“I am preparing a solid defense against him, but of course I am mixing in some offense as well. I am not sure if he will expect that I will add a twist to my game, but 80 percent of my preparation is in strength and conditioning,” he explained.

“For this match, I think the strategy will flow once I am in the cage. I will just do my best to get the win, but also provide an exciting bout for the audience to enjoy,” Catalan added.

Catalan expects that if he secures a decisive win over Peng at ONE: KINGS OF COURAGE, it will grant him a rematch with Silva for the ONE Strawweight World Championship belt.

“Every fighter dreams to become a world champion. I really hope that ONE Championship will give me an opportunity to vie for the title in the future. This bout might be the door to a world title contest. Let us all hope for the best,” he ended.