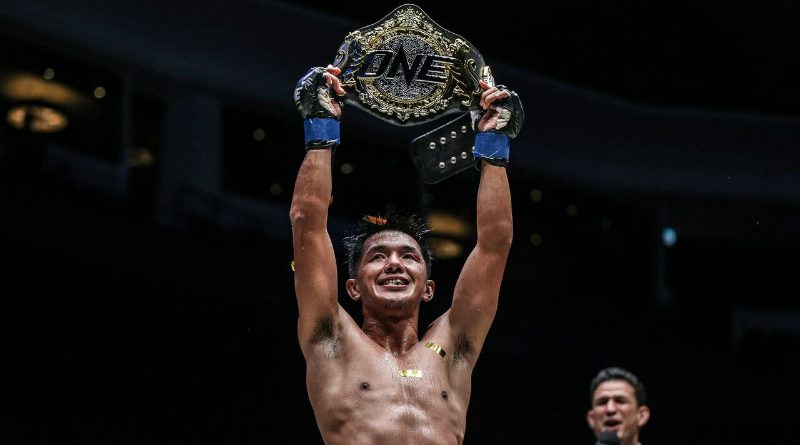 ONE flyweight fighters Adriano Moraes, Toni Tauru, Kairat Akhmetov, and Anatpong Bunrad have something thing in common: they all had beaten Cordilleran star Geje Eustaquio at one point of their careers, only to absorb a loss from the “Gravity” in a rematch.

Another name may join the group if Eustaquio had his way.

With ONE Championship recently announcing the resumption of its 2020 flagship event schedule, he hopes to make his return to action in same manner as with these four, exacting revenge over Yuya “Little Piranha” Wakamatsu.

For the record, Wakamatsu was the only adversary who was able to floor Eustaquio, accomplishing it during One Championship – Dawn of Heroes on Aug 2, 2019 by connecting a right cross at the 1:59 mark of the first round that ended the bout.

It was a defeat Eustaquio still remembers today and is raring to get a chance to live up to his moniker. “He is the only guy who knocked me out, and I think I can also knock him out,” he recently said to ONE.

He also seems to be confident he can get his revenge if given the opportunity, even as he shows respect to the Japanese star. “The fighting style of Yuya is like, ‘Wait for the knockout, wait for the knockout.’ It’s that kind of stuff,” he says.

Eustaquio is ready push and dictate the pace of the fight in the rematch where he expects one of them gets to see a knockout.

While his preparedness and his shape and condition is still to be seen is due to the COVID-19 pandemic that hit many parts of the world, his previous bouts bear witness to his deadliness in the return bouts.

Eustaquio lost to Bunrad on April, 2015 via split decision but Eustquio’s victory in the same way he fell knotted the head-to-head win-loss count at 1 split-decision triumph each after 30 hard-fought minutes of fighting across their two bouts.

Eustaquio avenged another of his controversial defeat to former flyweight world titleholder Akhmetov in ONE: Global Superheroes held last January 26, 2018 at the Mall of Asia Arena.

The bout was a rematch of the pair’s September 2017 clash, won by Akhmetov via split decision. The result was much clearer in the rematch, the first five-rounder for “The Gravity”, where he got a unanimous decision from the judges to capture the ONE Interim Flyweight World Championship.

The Moraes rematch was probably the sweetest for Eustaquio because he lost badly in their first encounter and took the ONE World Flyweight Title in the rematch.

Eustquio could not finish the first bout, tapping out due to a guillotine choke at the 3:54 mark of the second round, held September of 2014.

He gave a raucous crowd in Macau. China a reason to get into a rapturous chorus of cheers when he took position of the strap via a split decision.

Eustaquio, however, yielded the title back to Moraes after ONE approved of their trilogy.

Finally, the Tauru revenge was the most explosive so far.

Eustaquio got an unfortunate pre-Christmas gift on December 2nd of 2016 when Tauru executed a rear-naked choke at the 3:55 mark of the first round during their first bout that forced him to tap out.

The second bout saw a pump-up Eustaquio, who made use of the patented Team Lakay spinning kick as the clean reason to ending the rematch held just November 2019.

Eustaquio pulled the move that found its target to end the bout via knockout at 2:11 of Round Three.

The earlier minutes saw Tauru mimick his technique during their first fight, finding the submission move. Eustaquio, however, defended against them and got his rhythm going as the rounds advance.

He then started connecting solid punches and kicks against his taller opponent. He exchanged hits with Tauru without over committing until he found the right time and connected a spinning back kick, 2:12 gone in the third frame.

A few seconds later after both fighters sized up each other, Eustaquio attempts the same shot and lands it squarely to the midsection to send Tauru crumbling to the mat, forcing the referee to waive the fight.