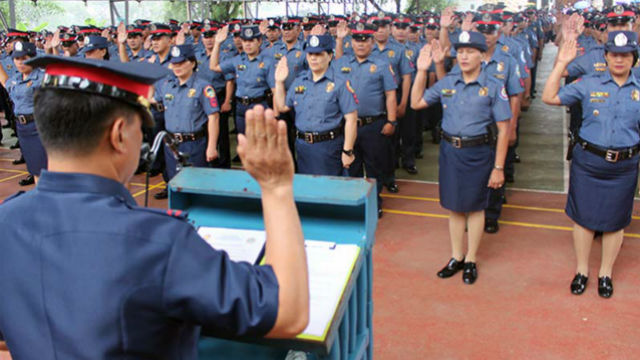 The Sangguniang Panlalawigan in its Resolution No. 2017- 498 commended PSSupt. Tellio C. Ngis-o who assumed office on November 23, 2016; has been instrumental in attainment of a Drug- Cleared Mountain Province.

In said resolution signed by Governor Bonifacio C. Lacwasan, Jr., Vice Governor and Presiding Officer Francis O. Tauli and Secretary to the Sangguniang Panlalawigan Lynette K. Politchay, it was stipulated that under the able stewardship of PSSupt. Ngis-o, the Mountain Province PNP has been true to its role as keeper of peace and order in the province as manifested by the decrease of crime incidence.

Also, the members of the Sangguniang Panlalawigan in their regular session recognized that under his watch, Mountain Province was declared Drug-Cleared after clearing all barangays of illegal drugs.

With his support and initiative, Rev. Fr. Marcial C. Castañeda was inspired to compose the Drug-Free song of Mountain Province which was adopted by the Sangguniang Panlalawigan as the official campaign song of the province in its fight against illegal drugs.

The resolution further stipulates that “under his leadership, an unprecedented cooperation of the police with the local political leaders and the various sectors of the community in the fighting all forms of criminality has been forged.”

Governor Bonifacio C. Lacwasan, Jr. who personally handed the commendation to PSSupt. Ngis-o in the presence of provincial government employees during the regular Monday Flag Raising Ceremony reiterated the province’ gratefulness to PSSupt. Ngis-o’s sincerity, dedication and commitment in serving the people of the province.

In response, PSSupt. Ngis-o remarked that from the time he assumed his post in the province, he had only one vision which is to improve the general peace and order for the common good of the people of Mountain Province.

PSSupt. Ngis-o who traces his roots to Mountain Province is grateful and honoured to serve his own province.

“This is the best legacy in my personal life. The experience that I had here in Mountain Province,” he stated.

PSSupt. Ngis-o will be living the Mountain Province PNP –Provincial Command and will be joining the PNPs higher headquarter.