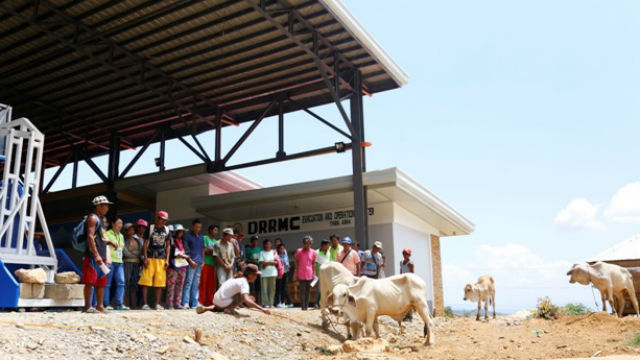 Members of the Alawa-Tapayen Farmers’ Organization receives one cattle each during the turnover ceremony held on April 25, 2018. Contributed photo

Tineg, Abra – 23 farmers received one head of cattle each from a subproject dubbed “Cattle Fattening and Marketing” funded under the Department of Agriculture’s Philippine Rural Development Project (DA-PRDP) during a turn-over ceremony here on April 25, 2018.

Dr. Herminia Balaoit, Municipal Agriculturist of Tineg said that the 23 heads of cattle were delivered as part of the first tranche and the remaining 10 heads will be delivered the soonest.

The subproject was proposed by the Alawa-Tapayen Farmers’ Organization assisted by the municipality of Tineg and the provincial LGU of Abra. The proposed business plan was pegged to be implemented through the I-REAP Component’s Small Livelihood Project for calamity-stricken areas. It is said to focus on cattle fattening and marketing as an entrepreneurial scheme aimed at increasing Tineg farmers’ income.

The business plan revealed that this subproject aims to provide farmers with 33 heads of male upgraded Brahman stocks at least one year old. The stocks are distributed to eligible members of the organization at one to two heads per farmer-recipient depending on their capacity.

In order to sustain the project, the business plan stressed that the total acquisition value shall be remitted back to the association. Accordingly, the fund shall be used to purchase more stocks for other members to benefit from. One percent of the gross sales shall be charged by the association for every sale made as part of their capital build-up.

The subproject’s total capital of one million pesos was proposed to be funded by the PRDP, sourced from the World Bank (60%), Government of the Philippines through the DA (20%), and the LGU (20%).  For every subproject under this scheme, a counterpart of 20% of the total project cost is required to be provided by the benefiting organization in-kind in the form of animal housing, labor, among others.

During the turn-over ceremony, local officials of Tineg thanked the PRDP staff present in behalf of the municipality as well as the  organization and urged the members to make sure that the project will succeed as planned.

“Kadakayo nga naka awat, tarimaanen yo ta nagasat kayo. Saysayaaten yo ta matungpal iti ada dita business plan yo. (To those of who were able to receive, make good at it because you are lucky to be recipients.  Make sure that you follow your business plan),” said Hon. Randy Valencia, Sangguniang Bayan Member, in his closing remarks during the turn-over ceremony. // MBZabala